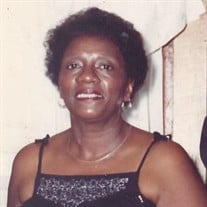 In the early afternoon of Tuesday, April 21, 2020, the Lord called another soul home to rest. Mary Alice Davis Lawrence quietly left this world for the next at Forest Pine Assisted Living in Columbia, South Carolina. Born January 16, 1930, in Columbia, South Carolina, she was the daughter of the late Eddie and Jennie Mae Martin Davis. Educated in the public schools of Richland County, she was a 1948 graduate of Booker T. Washington High School. After taking some time off to work, Mary continued her education at Benedict College in Columbia, earning a Bachelor of Arts in Elementary Education in 1954. Shortly after graduation she married her life partner, the late Eddie Lawrence. To this loving union, two children were born. Mary served as a Substitute Teacher at Boykins Elementary School in Boykins, Virginia, before relocating to New York City and pursing another career as a Children’s Counselor with the BCW Children’s Center. She was responsible for the early development of the physical, emotional, social, and spiritual well-being of the children from two to six years of age for five years before being promoted in 1962 as Supervising Children’s Counselor, where she was responsible for the training and supervision of six or more counselors. At the same time she was also serving as Assistant to the Director, where she assumed all duties and responsibility for overall operation of the Center in the absence of the Director until 1977. From 1977 until her January 1992 retirement, Mary held supervisory positions in both the Location and Interview Units of the Office of Child Support Enforcement #3. Here she performed a wide range of duties including: work activities and assignments; evaluating job performance; training new hires; and enforcing work quality standards per program objectives. Mary was baptized at an early age at St. Paul Baptist Church in Columbia, South Carolina. Her faith was always vital, and she made it active by serving as Church Secretary at St. Paul and President of the Pastor’s Aid Society. While residing in New York, she was an active member of Canaan Baptist Church. An outgoing person, Mary enjoyed socializing with friends, but she especially enjoyed cruises and family reunions where she could dance and laugh with family and friends alike. Her warmth and jovial manner will long be remembered by those who worked closely with her. In addition to her parents and spouse, she was preceded in death by two children: Carolyn Davis-McGruder and Gregory J. Lawrence; and four siblings: Hattie L. Owens, Eddie Mae Cook, Shirley C. Williams, and Margaret L. Daley. She leaves to cherish precious memories her daughter Dana (Carl) Dickey of Columbia; five grandchildren: Davon (Mateka) Lawrence of Columbia, Carl Dickey of Delran, New Jersey, Myles Dickey of Wilmington, Delaware, Eddie Lawrence of El Paso, Texas, and Neraina Mixson of East Orange, New Jersey; three great-grandchildren: Ja’Niyah, Lyric, and Londyn Lawrence, all of Columbia; two sisters: Jacqueline A Lawrence of Augusta, Georgia, and Earline Robinson of Columbia; and a host of nieces, nephews, other relatives and caring friends, all of whom will miss her dearly.

The family of Mary Alice Davis Lawrence created this Life Tributes page to make it easy to share your memories.

Send flowers to the Lawrence family.