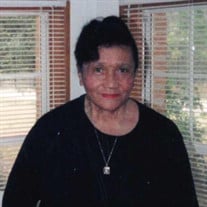 Life Reflections - Mrs. Mary Martha Kibler Lewis, 99, departed this earthly life to be with the Lord on Tuesday, April 20, 2021 in Sumter, SC. Born on April 20, 1922 in Portsmouth, Virginia, she was the second of three children born to the late Frank Kibler and Cassie Pringle Kibler Mrs. Lewis was educated in the Sumter County Public School System. She was a devoted and faithful member of Saint Matthews Missionary Baptist Church in Sumter, where she served faithfully in many capacities including: Deaconess Board, Senior Missionary Society, Senior Choir Treasurer, and the Pastor’s Aide. She previously served under the leadership of Rev. M. G. Walters and later under the leadership of Rev. Calvin K. Hastie, Sr. In 1949, she married the love of her life, the late Deacon Dock Collin Lewis and to this loving union seven children were born. For years, she and her husband had a prosperous farm business and she managed the day to day operations of the household. Mrs. Lewis personified gentleness, kindness, sweetness and she poured out her love to all she met. Her love was unconditional especially for her children, grandchildren and great-grandchildren, who brought joy and laughter to her life. Her goodness was demonstrated in a great out-pouring of love to others, which allowed love to be returned tenfold. “Her cup runneth over with love“ was her mantra. She was an unforgettable woman, who had an amazing ability for spelling and was an avid reader. In addition to her husband and parents, she was preceded in death by a sister Martha; brother George Kibler, granddaughter, Charlene Butler; and son-in law, John K. Blackwell. Loving memories will be cherished by: one son, Alvin Lewis of Sumter, SC, six daughters, Barbara Butler of New Bern, NC, Cynthia (Earl) Loyd of Virginia Beach, VA, Jacqueline Lewis of Sumter, SC, Brenda Blackwell, Rosemary (John) Clinton, Sheila (Willie) Moody and all of Columbia, SC ;one Aunt Mary Mack, Sumter, eight grandchildren, six great-grandchildre; a host of other very special relatives and friends. To view the livestream via Facebook: Go to Facebook and then go the Palmer Memorial Chapel page. Like the Palmer Memorial Chapel page, and you will be able to see the livestream of the service. *KIBLER CEMETERY, SUMTER, SOUTH CAROLINA *FACE MASKS ARE REQUIRED, PER THE FAMILY AND WE SINCERELY THANK YOU.

Life Reflections - Mrs. Mary Martha Kibler Lewis, 99, departed this earthly life to be with the Lord on Tuesday, April 20, 2021 in Sumter, SC. Born on April 20, 1922 in Portsmouth, Virginia, she was the second of three children... View Obituary & Service Information

The family of Mary Martha Kibler Lewis created this Life Tributes page to make it easy to share your memories.