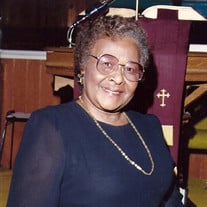 Mrs. Mary Lee Toomer Thompson was born on November 20, 1920 in the Texas community of South Carolina, located in rural Dorchester County, the third child of 12 siblings and eldest daughter of the Reverend Willey and Mrs. Minnie (Tobin) Toomer. Growing up as a minister’s child, her father pastored several churches around Dorchester and Clarendon counties, and church life was second to none. While attending high school, she was an athlete, played basketball and was the team’s point guard. The Toomer family eventually moved to St. George, SC. While working as a cosmetologist, it was there that she met her future husband, Charles I. Thompson, a graduate of Allen University and local teacher. They married on her birthday in 1944. Over time, the family lived in Orangeburg and Charleston, SC. They finally settled in Sumter, SC. following Charles’ occupational progression in the education system as a teacher, coach, and Assistant Principal at Sumter’s Lincoln High School, and the school district’s Adult Education Director. While living in Sumter during the early years, Mary concentrated her time on rearing the three children, and was a licensed cosmetologist. She serviced clients out of a cinder block shop built for her by Charles in the back yard of the home. But she never lost sight of furthering her education, a trait her father instilled in all of the Toomer offspring. Mary graduated from Morris College with a degree in elementary education, and began a teaching career in Sumter School District 17 that spanned over 20 years. Mary was very active in the Sumter community and in First Baptist Church, to which she has been a member for over 60 years. She was the church’s Girl Scout Troop Leader for many years, a member of the choir, and several church missionary circles. She was a member of the Federated Girls Club, the Sumter Historical Commission, the Green Thumb Garden Club, and the North Main Street Community Club. She was also a member of the Zeta Phi Beta Sorority, Inc. Mary was an outgoing person who loved to dress up and travel, cruising to the Caribbean, Mexico and Alaska, and once to Spain. She loved visitors, insisting that you feel welcomed and comfortable, share, partake of her hospitality, and discover later that you must request permission to leave. She was always one for a good hearty laugh which was medicine for whatever ailed you while in her presence. Above all, she tried to live as Christ did, always concerned about the welfare of others above her own, and thinking what could she do to make one’s life a little better while in her presence. Mary is predeceased by: eight siblings, brothers T.J., Sam, Jethro, and David Toomer, and sisters: Juanita Toomer Ford, Helen Toomer Crique, Contrina Toomer Clark, and Louise Toomer Thomas. In her transition to eternal life, she finally gets to see again her loving husband of 56 years. She leaves wonderful and cherished memories for: her three children, Barbara (John) Tate, of Jacksonville, NC, Charles, Jr. (Mary) Thompson, of Atlanta, Ga, and Ronald (Marilyn) Thompson, of Columbia, SC., two sisters, Minnie Calendar, Cape May Court House, NJ, Alice (Herbert) Williams, of Valdosta, Ga, and one brother, Stoney (Tillie) Toomer, of Beaufort, SC. There is also a legacy of seven grandchildren, and ten great grandchildren who affectionately refer to her as “GG”.

The family of Mary Lee Toomer Thompson created this Life Tributes page to make it easy to share your memories.