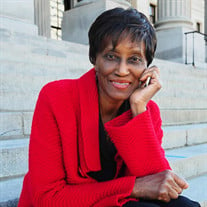 On Tuesday, April 7, 2020, the Lord called another angel home. Mary Williams died peacefully at her residence in Columbia, South Carolina. Born December 4, 1943, in Newberry, South Carolina, she was the second of seven children born to the late Frank and Mary Atchison. A 1962 graduate of Gallman High School, she went on to earn an Associate's Degree in Business. In 1970, she married the late Freddie Lee Williams, a US Army veteran and member of the US Postal System. Their union was blessed with two children. Mary began working for the Department of Defense in the Directorate of Human Resources at Fort Jackson, giving dedicated service to her country for over thirty years. During her tenure there, she accumulated countless awards and recognitions. Her children remember her as a kind, gentle, patient mother who encouraged them to pursue their goals. Mary was a generous and selfless individual who spent considerable time and energy caring for others. She was passionate about doing all she could to promote the well-being of all. She loved to cook and bake, even winning contests for her pies and pastries. Mary found joy in travel as well, visiting many faraway locations like Alaska, Mexico, Japan, Korea, and China as well as embarking on seven cruises in her lifetime. She also took up residence in many locations along the East Coast: Virginia, New York, and Florida among them; before returning to South Carolina to begin a family. Upon her return to Columbia, she became an active and dedicated member of Bethlehem Baptist Church, serving for over thirty years on various ministries throughout the church including: Usher Board, Church Secretary, Bethlehem Food Pantry, and more. After her retirement, Mary continued to be a consistent member of the Usher Board and Seniors in Action ministries. She was recognized for her lifelong contributions in 2013, being honored as Bethlehem Baptist's Woman of the Year. In addition to her parents and spouse; she was preceded in death by two siblings: John "JW" Atchison and Constance Atchison. She leaves to cherish precious memories her two children: Cedric (Julie) Williams of Los Angeles, California, and Latasha (Nathan) McCoy of Okinawa, Japan; four grandchildren: August Williams, Ellis Williams, Ananda McCoy, and Ilana McCoy; four siblings: Brenda Cole, Frank Atchison Jr., Michael Atchison, and Shirley Atchison; an aunt, Pauline Fowler; other relatives and friends. The family requests that in lieu of flowers, memorial donations be made to the Alzheimer's Association (http://act.alz.org/donate).

On Tuesday, April 7, 2020, the Lord called another angel home. Mary Williams died peacefully at her residence in Columbia, South Carolina. Born December 4, 1943, in Newberry, South Carolina, she was the second of seven children born to the... View Obituary & Service Information

The family of Mary Alice Williams created this Life Tributes page to make it easy to share your memories.