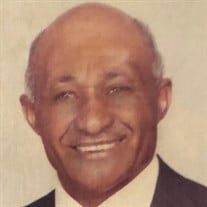 Born in the Richland County section of Irmo, South Carolina on January 12, 1922 to the late Mr. and Mrs. Robert N. (Carrie B.) Reeves. He was the second of eight children. He departed this life on Thursday, April 4, 2019 at the Dorn Veterans Administration Hospital in Columbia, South Carolina. A life-long resident of Irmo, he attended the Harbison Parochial School in Richland County. He enlisted in the United States Army in July of 1943 and served in World War II on the front lines as a Truck Driver in the Battle of Normandy (the largest amphibious invasion in history), Northern France, Rhineland, and Central Europe. He received the European - African - Middle Eastern Campaign Medal with four bronze service stars and the Victory Medal for his valiant service. At an early age, He accepted the Lord Jesus Christ as his Savior and he joined St. Paul AME Church where he saw many members of his family serve as preachers, pastors, and church builders. Rev. Reeves was married to his devoted wife, Mrs. Seretha Bookert Reeves and to this union, seven children were born. He was ordained as a local elder of the AME Church and served as such at St. Paul AME until his health declined. He was also the Father of the church. Rev. Reeves loved hunting, fishing, gardening, and sports. He loved life and lived with a joyful spirit and a keen sense of humor, always making people laugh. He drew his strength from his strong faith in the Lord and was affectionately called the “Iron Man” by his children, and his nieces and nephews. Additionally, he owned a logging business and provided jobs for many in the Irmo and surrounding community. He later retired from the maintenance department of Lexington/Richland School District Five. In addition to his parents, a son, Donald Lewis Reeves, preceded him in death. Two brothers and four sisters also preceded him in death: The Reverend Roland Reeves, Sr., Erskine Reeves, Sr., Inella Reeves Burkett, Rhudene Reeves Ashford, Katherine Reeves Johnson, Mary Reeves Metze, and one foster sister, Ethelene C. Eichelberger. He leaves to cherish his memory, a devoted wife, Mrs. Seretha Bookert Reeves; two daughters: Rev. Dr. Maxine Reeves Sumpter and Rev. Rhudene Reeves (Carl) Toomer, M. Div., of Irmo, SC; four sons: Ronnie (Veronica) Reeves and Harold J. Reeves of Irmo; Rev. Dr. Morgan Bruce Reeves of Winnsboro, SC, Tony (Dr. Geri) Reeves of Hendersonville, TN; seventeen grandchildren; seventeen great-grandchildren; sister, Hortense Whetstone of Columbia, SC; daughter-in-law, Dovey Reeves of Charlotte, NC; sisters-in-law, Ruth Exum and Diana Bookert of Columbia, SC; brother-in-law, Theodore Calhoun of West Virginia; and a host of nieces, nephews, cousins, relatives and friends. He often quoted or sang the following favorite words, “It’s getting late in the evening and the sun is going down. If I don’t wake up in the morning, everything will be alright.”

Born in the Richland County section of Irmo, South Carolina on January 12, 1922 to the late Mr. and Mrs. Robert N. (Carrie B.) Reeves. He was the second of eight children. He departed this life on Thursday, April 4, 2019 at the Dorn Veterans... View Obituary & Service Information

The family of Rev. Matthew Joseph Reeves created this Life Tributes page to make it easy to share your memories.

Born in the Richland County section of Irmo, South Carolina on...

Send flowers to the Reeves family.