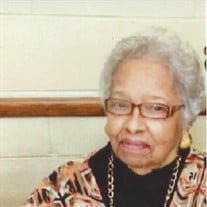 On Sunday, June 25, 2017, Mrs. Maxine Nelson Walters, gathered her family around her bedside, said good-bye, and transitioned into eternity. Mrs. Maxine Walters, affectionately known as “Tut” and “MeMa,” was the second and oldest daughter of four children born to the late Maxine Cayruth Nelson and Alexander King Nelson. Raised in the Waverly Community of Columbia, she attended Waverly Elementary School, Carver High School, and graduated from Booker T. Washington High School in the Class of 1949. While a student at Booker T. Washington, she was a head majorette with the marching band, was voted “Most Beautiful in the Class,” and was a member of the first twelfth grade class to graduate from Booker T. Washington High. While in high school, she met the love of her life, Otis Walters, Sr., at a skating rink; they became sweethearts, and at the age of eighteen, they married. Their loving union was blessed with four children: Otis “Skip,” Michael, Gregory, and Cederia Elaine. After marriage, she moved her church membership from Second Calvary Baptist Church (the family church of her birth) to Zion Baptist Church in order to keep her family together. She believed that a family who worships together, stays together. In raising her family, she wanted everyone to always do what was right. Mrs. Walters was employed by and made history as the first black salesperson at JC Penney Department Store on Main Street. When the store merged and relocated, she retired after numerous years of dedicated service. In her spare time, she enjoyed spending quality time as the backbone of her family. Mrs. Walters had a special love and devotion for children, babysitting from one generation to the next (earning the name “MeMa”). Not only would she babysit for the family, but for neighbors and anyone who was in need. She was an excellent cook, and was famous for her special potato salad and “chitlins.” She enjoyed dancing and attending parties. In addition to her parents and husband, she was preceded in death by a brother, Herbert Nelson, and a sister, Marjorie Nelson. “Tut” leaves to cherish precious memories four devoted children: Otis (Rev. Cynthia) Walters, Jr., Michael (Deloris) Walters, Gregory (Chaity) Walters, and Cederia Walters, all of Columbia; thirteen grandchildren: Capt. Peyton O. Walters, Specialist Jarryd Walters, Rena Walters, Laquanda (Lamonte) Griffin, Michael (Tomeka) Walters, Jr., Linquann (Nicole) Walters, India Walters, Gregory (Sally) Elmore, Latoria Walters, Tashia Walters, Tora Walters, Keosha Walters, and Donrae Frierson; eighteen great-grandchildren: Armon Williams, Albony Anthony, Emmanuel Cunningham, Michael Walters, III, Nya-Jolie Walters, Xzavior Walters, Jaden Williams, Linquann Walters, Jr., Courtney Elmore, Taylor Walters, Tori Walters, Mason Miller, Cameron Reed, Harmoni Kennedy, Malia Kennedy, Donrae Frierson, Jr., Legend Frierson, and Kyrah Briggs; one great-great-grandchild, Ashton Anthony (amazingly she knew everyone’s birthday); one attentive sister, Alice Marie “Rhee” Nelson Brown, of Columbia; a sister-in-law, Vivian Gray Nelson; a special caregiver, Connie; and a host of other family and friends. Maxine loved all, and all adored “MeMa.”

The family of Maxine Nelson Walters created this Life Tributes page to make it easy to share your memories.

Send flowers to the Walters family.