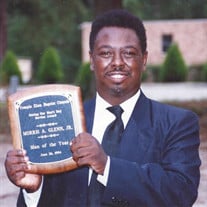 Morris Alex Glenn, Jr., affectionately known as “Squeaky,” departed this earthly life on Wednesday, January 3, 2018, at the Millennium Acute Rehabilitation Center , in West Columbia, South Carolina. Born in Columbia, South Carolina, on November 21, 1965, he was the son of Betty L. Bookert Glenn-Washington of Columbia and the late Morris A. Glenn, Sr. Educated in the public schools of Richland County, he was a graduate of Eau Claire High School. Morris was a former employee of Babcock Center until 2014. Morris then was a greeter at the Millennium Center until his passing. Morris was a lifelong, faithful member of Temple Zion Baptist Church for over 40 years. He served his church as a member of the Usher and Trustee Boards and attended every Sunday and was a participant in all church activities. Almost every Sunday, Morris could be found guarding the door at the church. In his spare time, Squeaky hobbies were studying cars and attending drag racing events. He would imitate the sounds of those cars, the louder the sounds, the greater his excitement. He also enjoyed working on cars with his uncle, Willie Lee Glenn, as a mechanic. He was a people person who enjoyed conversing with people from all social backgrounds; he never met a stranger because everyone was family or a friend to him. He would greet you with a huge kiss and a big smile. Those left to cherish fondest memories are his mother, Betty L. Glenn (Andrew) Washington; uncles: Bobby (Ruth Ann) Glover, David Bookert, Tommy Glenn, James (Doris) Glenn, Willie Lee Glenn, Jonathan (Veronica) Glenn, and Ronnie Glenn, all of Columbia, and Joe Lewis (Trudy) Glenn of Oak Ridge, North Carolina; aunts: Letha Mae Harris and Lucille Wager, all of Columbia; a step-brother, Anthony Washington of Aiken; two step-sisters: Angeline (Frank) Majors and Joletta Washington, both of Columbia; special cousins: Eric, Derrick, and Victoria Glover, all of Columbia; a great-aunt, Jessie M. Bookert, of Columbia; a devoted friend, Russell Belton of Columbia; and a host of nieces, nephews, other relatives and friends.

The family of Morris Alex Glenn Jr. created this Life Tributes page to make it easy to share your memories.

Send flowers to the Glenn family.