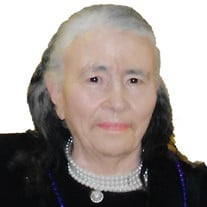 In the early afternoon of Tuesday, June 25, 2019, the Lord called Mozelle Simons Wilson, wife of the late Edward Wilson, Sr., home for her reward. Born May 18, 1932, in Eastover, South Carolina, she was a daughter of the late Gaddie and Lottie... View Obituary & Service Information

The family of Mozelle Simons Wilson created this Life Tributes page to make it easy to share your memories.