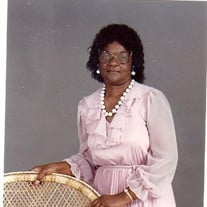 Life Reflections Mrs. Naomi Smith Hinnant departed this earthly life on Tuesday, October 24, 2017 at Palmetto Health Tuomey in Sumter, South Carolina. Born in Sumter County on May 30, 1933, she was the daughter of the late Mr. Lucious Smith and Mrs. Annie James Smith. Mrs. Hinnant was a pillar of strength and knew how to take care business. She was always there if someone needed a helping hand. Everyone appreciated her giving spirit and enjoyed her witty sense of humor. Mrs. Hinnant’s formal education was received from the public schools of Sumter, South Carolina. She retired from Tuomey hospital after twenty-three years of employment. She was also a faithful and compassionate caregiver for her sister Lucille and brother Morris. She was reared in a Christian home and received Christ as her Lord and Savior at an early age at her family’s church, Westminster Presbyterian Church. After marriage to the late Mr. William Hinnant, she joined Mulberry Missionary Baptist Church. She served faithfully on the Senior choir, the Missionary Society, and the Senior Citizen Ministry for many years. Mrs. Naomi Hinnant was united in marriage to the late Mr. William Hinnant on September 17, 1949 and to this union one child was born, Rosa Lee Hinnant, who preceded her in death. She was also preceded in death by two sisters: Lucille “Sister” Smith Wilson and Jessie Mae Smith Jones; and eight brothers: Danzie Smith, Ben Smith, Nero “Boot” Smith, Clyde Smith, Willie Smith, McNeil Smith, Lucious Smith Jr., and Thad “Morris” Smith. Those left to cherish her precious memories are several nieces, nephews, cousins; a sister-in-law, Fannie M. Smith and a host of other relatives and dear friends. In lieu of flowers please make donations to: Mulberry Missionary Baptist Church, 1400 Mulberry St., Sumter , SC 29153, Professional services rendered by Palmer Memorial Chapel, Inc.

The family of Naomi Smith Hinnant created this Life Tributes page to make it easy to share your memories.

Send flowers to the Hinnant family.