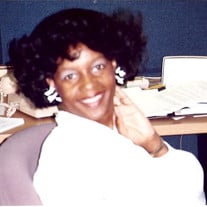 Norma Jean (Abney) Gamble) was the daughter of the late Hayward Abney Sr. and Bernice (Starks) Abney. Born on January 23, 1950 in Philadelphia, PA, she was not only the fifth of ten children but also the fifth girl of this union. One sister, Bernadine (Abney) Garris and one brother, Hayward Abney, Jr. preceded her in death. She departed this life, with her husband, whom she dearly loved, at her bedside on Wednesday night, August 22, 2018. Norma was educated in the public school system in Philadelphia, PA and graduated with a degree in Business from Overbrook High School. Upon graduation, Norma was hired by the PNC Bank. The Department of Labor had offices in the same building. They noticed Norma’s expertise and work ethic and offered her a job in the Department of Labor. She rose to the rank of Administrative Assistant. This speaks of her work ethic. Norma had one son from a previous marriage, Terrance Bernard Oden. Norma married Henry Gamble on February 28, 1997. They retired to Lynchburg, South Carolina in 2000. Norma accepted Christ and was saved during her teenage years. Norma joined St. Matthews A.M.E. Church where she willingly served on the Choir, Pastor’s Aide, Class Leader and the Kitchen Committee. Norma loved singing and had a beautiful Alto voice. She enjoyed praising and worshipping God through song. She also had the gift of “Helps.” Norma had a giving and generous spirit. She loved cooking, baking, canning vegetables and fruit that her husband grew in their garden. Norma would share these “goodies” with friends and family. Norma volunteered at the Senior Center where she made many friends. Additionally, her hobbies included Ceramics, Decorating, Knitting and of course, shopping. In addition to her husband, Norma simply adored her son, Terry, daughter-in-law and grandchildren. Norma accepted her long, terminal, illness with “Grace” and told her sister, she was ready and not afraid to die, whenever God would call her home. He has called her to her eternal home, a place where the wicked shall cease from troubling, the weary shall be at rest and all of the Saints of the ages shall sit at His feet and be blessed. She leaves to mourn her loss, her husband Henry (Tommy), son, Terry; daughter-in-law, Corrine, sisters: Gwendolyn Knight (Marlton, NJ), Cheryl Evans, Muriel Waters, Vandelyn Miller (all of Phila. PA), brothers: Ronald, (Ridley Park, PA,), Gerald (Gilda) (Yeadon, PA,) Clinton, (Wanda) (Malvern, PA); sisters-in-law: Olivia Abney, Fran. Lewis, (both of Philadelphia, PA), grandchildren, and a host of nieces, nephews and friends.

Norma Jean (Abney) Gamble) was the daughter of the late Hayward Abney Sr. and Bernice (Starks) Abney. Born on January 23, 1950 in Philadelphia, PA, she was not only the fifth of ten children but also the fifth girl of this union. One sister,... View Obituary & Service Information

The family of Norma Jean Gamble created this Life Tributes page to make it easy to share your memories.

Norma Jean (Abney) Gamble) was the daughter of the late Hayward...

Send flowers to the Gamble family.