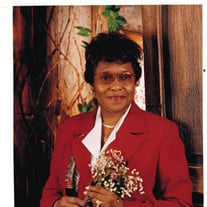 Life Reflections Ola Mae Witherspoon Budden was born August 3, 1940, in Sumter, South Carolina to the late Isell Weldon Witherspoon and Mamie Davis Witherspoon. She was the oldest of eight children and quietly departed this life at her home on Saturday, December 11, 2021. Mrs. Budden received her early education at Dwyer Tindal School in Sumter and is a 1958 graduate of Manchester High School in Pinewood, South Carolina where she developed a love for home economics and excelled in sewing, decorating, cooking, and baking. Her sister Lucille fondly remembered her saying, “she was Martha Stewart before there was a Martha Stewart.” After a brief stay in New York, she married the love of her life and best friend, Mr. London Budden, Jr. on July 2, 1961, and moved to McRae, Georgia. They relocated to Albany, Georgia in 1964 and remained there until retiring to Sumter, South Carolina in 2005. Their union was blessed with two daughters (Angela and Cheryl). Mrs. Budden accepted Christ and joined Enon Baptist Church in Sumter at an early age. She joined Shiloh Baptist Church in Albany, Georgia in 1965 and joined Jehovah Missionary Baptist Church in Sumter, South Carolina in 2005 where she was a devoted member until her transition. Mrs. Budden was a woman of excellence, decency, and order. She was a firm advocate for education and as a school principal she had an exceptional track record for promoting academic achievement. Her passion for education was mirrored by her civic and community involvement. She made immeasurable contributions to the Dougherty County School System as well as her Albany, Georgia, and Sumter, South Carolina communities where she received numerous honors and awards as outlined in the Affiliations/Accomplishments section. If you ever had the pleasure of meeting her, your life was changed forever. She was always ready and willing to help anyone that she could. It was nothing for her to give her all and she seemed to be able to do anything. One dear friend described Mrs. Budden perfectly by saying, “when you open the dictionary and look for the word perfection; you will see her name.” Left to cherish her precious memories are a devoted husband of sixty years, London Budden, Jr; two daughters: Angela Yvette Budden and Cheryl LaVette Earls; one granddaughter, Bria Nicole Earls; one brother, Isell “Bubba” Witherspoon, Jr; five sisters: Lucille Cummings, Ida (Thomas) Felder, Bernice Townsell, Connie (Gregory) Daniels, and Patricia (Rodney) Dunham; one god-son, Corey (Felicia) Thompson; one god-brother, Rev. Sammie (Tonya) Drayton, Sr., three uncles, a host of nieces, nephews, cousins, other relatives, and friends. In addition to her parents, she was preceded in death by one brother, Samuel Witherspoon, and one sister-in-law, Freda Witherspoon. In lieu of flowers, please make check donations payable to • JMBC Christian and Academic School (415 Manning Avenue, Sumter, SC 29150) • Please note in the For section of the check (in the bottom left corner):“In Honor of Mrs. Ola Budden” • Or you may cash app $CherylEarls Thank you, ATTENTION; THE SERVICE LIVESTREAMING WILL BEGIN AT 12:30 PM.

Life Reflections Ola Mae Witherspoon Budden was born August 3, 1940, in Sumter, South Carolina to the late Isell Weldon Witherspoon and Mamie Davis Witherspoon. She was the oldest of eight children and quietly departed this life at her... View Obituary & Service Information

The family of Mrs. Ola Mae Witherspoon Budden created this Life Tributes page to make it easy to share your memories.