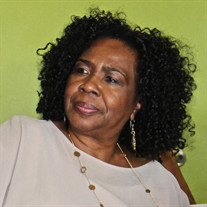 Patricia Lennon Blakeney, a beloved local leader in early childhood education, passed away at her home on Monday, June 10, 2019, at the age of 64. Born in Georgetown, South Carolina, Patricia was the daughter of Taft and Collet Lennon of Georgetown, South Carolina. She attended St. Cyprian Catholic School and graduated from Winyah High School in the class of 1972. Patricia went on to attend Johnson C. Smith University, graduating in the class of 1976. There she served as Vice President of the freshman class, Miss Lampados, Miss Omega Psi Phi, and Miss Johnson C. Smith University. After graduating with a bachelor’s degree in political science, she went on to run for Georgetown County Auditor in 1988, after a long career in the auditors offices of Georgetown and Richland Counties. In 1989, Pat began attending Bethel A.M.E. Church, where she met her mentor Georgia J. Elam, the owner of Columbia’s first Black-owned preschool center Kinder World. Pat went on to direct and expand Kinder World into a second location, as well as opening her own center, Kids Advantage After School Care. At Bethel, Pat became a devoted choir member, a member of the Lay Organization, director of the Youth Choir, chairperson of Women’s Day Celebration, a Trustee, a Steward, and many other roles. In 2005, Pat accepted the role as headmaster of Bethel Learning Center, where she led the design and construction of a $2 million preschool facility and increased enrollment to capacity. Her famous motto was “It is our responsibility to create in each child a thirst to learn. To not do so is unforgivable.” In 2015, she was awarded a Key to the City of Columbia in honor of her service in education. In 2016, Pat continued her education at Grand Canyon University with a master’s degree in early childhood education. She was preceded in death by her parents as well as her sister Ezphia Lennon Keith (James). Pat leaves to cherish her memory her daughter Collette Blakeney (Brian)Watson; sister Carrie (Harold) Johnson; brother James (Cynthia) Lennon; nieces: Kourtney Keith (Jermaine) Scott, Brittaney Johnson, and Whittany Johnson; nephew B.J. Lennon; and a host of cousins, other relatives and friends. She will be remembered as a devoted church member, spirit-filled gospel singer, and a hard-working school administrator who loved her teachers, parents and children with her entire heart and soul.

Patricia Lennon Blakeney, a beloved local leader in early childhood education, passed away at her home on Monday, June 10, 2019, at the age of 64. Born in Georgetown, South Carolina, Patricia was the daughter of Taft and Collet Lennon of Georgetown,... View Obituary & Service Information

The family of Patricia Lennon Blakeney created this Life Tributes page to make it easy to share your memories.

Send flowers to the Blakeney family.