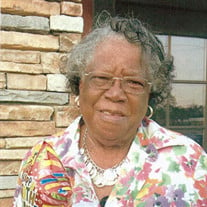 Patsy Howard Rivers, the daughter of the late John Howard and Sarah Shannon Howard Gadson, was born April 14, 1936 in Sumter County. She departed this life on Monday, January 28th at Prisma Tuomey Hospital after a brief illness. She began her education at the Catchall School and later completed her education at Hillcrest High School. She continued her pursuit of education by completing her certification as a nursing assistant. Patsy began her career as a member of the food management staff at Oakland Elementary School and later after receiving her nursing assistant certification she was employed by Cypress Nursing Facility and Tuomey Regional Medical Center. She worked part-time at Wateree Community Action Headstart. She retired but felt a calling to continue to serve others in the capacity of a personal care giver. Patsy was a lifelong member of the High Hills AME Church, where she served on several auxiliaries, which include Floral Club, Missionary Society, Ushers Ministry, Stewardess and Sunday School Teacher. She also served in her community as a member of the Golden Girls Club. She was united in marriage to the late David Rivers. In addition to her husband and parents, she was preceded in death by two sisters, Gertrude Snow and Louise Brooks; and one brother, Nathanial Howard. She leaves to cherish her memories six children, Clyde (Philamenia) Rivers of Norcross, GA, Merrial “Stevie” (Mary Alice) Rivers of Dalzell, SC, Rosa Marie Rivers (Isaac Magill) of Columbia, SC, Robert (Kathryn) Rivers of Columbia, SC, Debbie (Terence) Curry of Dunwoody, Ga, Patricia Rivers of the home; two sisters, Renda Dixon of Horatio, SC and Mamie Lee Arthur of Columbia, SC; two brothers, Lewis ( Emma) Howard of Horatio, SC and Henry Howard of Staten Island, NY; two sister in laws, Bernice Rivers and Wilhamenia Rivers of Dalzell, SC; one brother-in law, Lawrence Kershaw, seven grandchildren, four great grandchildren, and a host of nieces, nephews, and other relatives and friends. Patsy touched the lives of many and her humble and beautiful spirit will be missed by all who had the pleasure of knowing and loving her.

Patsy Howard Rivers, the daughter of the late John Howard and Sarah Shannon Howard Gadson, was born April 14, 1936 in Sumter County. She departed this life on Monday, January 28th at Prisma Tuomey Hospital after a brief illness. She began... View Obituary & Service Information

The family of Patsy Howard Rivers created this Life Tributes page to make it easy to share your memories.

Patsy Howard Rivers, the daughter of the late John Howard and...

Send flowers to the Rivers family.