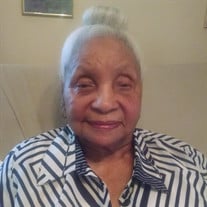 “Only a step to Jesus, Oh why not come and say, gladly to my Savior I give myself away.” Sunrise: Sunset: June 9, 1932 Pauline Walker Jackson March 16, 2017 Our beloved mother Pauline Walker Jackson was born on June 6, 1932 in Ehrhardt, SC to the late Thaddious Walker and Allefair Halyard Walker. She was the oldest of eight children. During her early years she attended the public schools in Bamberg county, but later moved to Sumter, SC where she graduated from Lincoln High School. Pauline was a talented and accomplished seamstress who worked in the area of retail and alterations at the Capitol Department Store and the Belks Department Store in Sumter from which she retired. She enjoyed sewing, all types of crafting and cooking, and was always willing to share her recipes. Pauline Walker was united in Holy Matrimony to the late Albertus Jackson of Sumter, SC and together they provided a loving home to three adoring and dedicated children: Albertus Jackson, Jr. of Sumter, SC; Fair Perdita Jackson Fadden (Blease) of the home and Katherlyn Veronica Jackson Walker of Las Vegas, Nevada. Pauline was a devoted wife and mother who loved her family and her church. As a member of Salem Baptist Church and before her health began to fail she faithfully and actively participated on the Salem Young Adult Choir, Mother’s Club and the Jet Club. Her earthly journey ended on Thursday, March 16, 2017 at her home when God quietly called her to her heavenly home. She was preceded in death by her parents, her husband, brothers, Charlie Thomas Walker, Alfred Fair Walker, Mannie George Walker, Terone Walker and one aunt, Helen Walker Nelson. Along with her three children she leaves to cherish her memories – two brothers, James Lewis Walker (Gladys) of Sheldon, SC; Willard Dean Walker of Darlington, SC. and one sister, Mae West Walker Richardson of Brooklyn, NY. Others who remain to celebrate her legacy of life and love, and whose lives have been enriched by her, include three grandchildren; Teresa Robinson, of Sumter, SC; Lovell Walker and Altonio Jackson, both of Las Vegas, Nevada; two great-grandchildren; NaJe Owens (Caleb) of Ohio and Raven Wright, of Sumter, SC, along with an endless array of other loving and caring nieces, nephews, cousins and friends.

The family of Pauline Walker Jackson created this Life Tributes page to make it easy to share your memories.

Send flowers to the Jackson family.