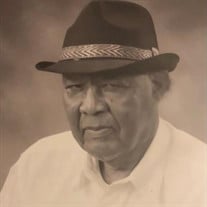 The funeral Mass for Pierre Antoine Bouchereau will be held 10:00 am Saturday, February 12, 2022 at St. John Neuman Roman Catholic Church, 100 Polo Road, Columbia, SC 29223, with the Father Sandy Mcdonald, Priest officiating. Entombment will follow at Greenlawn Memorial Park Mausoleum. The family will receive friends on Friday, February 11,2022 from 7 to 9 p.m. at the Palmer Memorial Chapel. Pierre Antoine Bouchereau, was born on January 3, 1933, in Port-au-Prince, Haiti to the late Celia Bastien and Leon Bouchereau. Antoine was best known by friends as "Tatanne" and his children as “Papi.” In 1970, Antoine immigrated to the United States with his wife Lucia to Brooklyn, NY. Like most immigrants, they left everything they knew behind to start a life in the US. The political unrest in Haiti was such that they knew, if their children were to have a real chance, they needed to gain residency in the US. They worked hard to accomplish this and then sent for their children who lived in Haiti with their maternal grandmother, Idamante St. Fleur. Antoine was an excellent cook so it’s no wonder that he ended up working at Sea Crest Nursing and Rehabilitation Center as a dietician for well over 30 years cooking and designing meals until his retirement. In addition to cooking for those in need, he loved cooking different meals for his family. In the early years of Antoine and Lucia’s marriage, he was the primary cook for the home. His children looked forward to coming home from school knowing their father would have a home cooked meal waiting for them along with some pain patate (sweet potato pudding). Lucia and Antoine made a good team. But, it was no secret that Antoine was the silent one in the relationship. Most major decisions were made with Lucia in the lead. But, when it came to his children, he had his own way of showing his affection and love for them. One of Eury’s cherished memories was when she wanted to play guitar in her church choir. Although Lucia saw this as a passing interest, he decided to buy her a guitar for Christmas. Till this day, Eury still can recall how she felt heard, understood, and loved. Anyone who knew Tatanne knew he enjoyed a good laugh. He always had a good joke to tell anyone who was willing to listen. It didn’t take much to get him going. Imagine him dancing around wearing Lucia’s wig, her sunglasses, and her hat. It was a sight to behold! On February 3, 2022, a month after he turned 89, he went to be with his Lord and Savior at 10:21 in the morning. His family, including his wife, his daughters, and his son-in-law, were able to say goodbye before he journeyed to peace. He will be remembered for his strength, humor and love for his family. He is survived by his wife of 60 years, Anne Marie Lucia Eustache Bouchereau, Daughters Eurydice Bauer and her husband Robert Bauer, Mihaly Wesh and her husband Rodini Wesh; Grandchildren: Jonathan Wesh and his wife Jessica Wesh, Jeremy Watson and his wife Susan Watson, Jessica Seabrook, Joshua Seabrook, Elena Bauer and Christopher Bauer; Great Grandchildren: Maddox Wesh and Benjamin Kozielski; as well as many great-nieces, great-nephews, cousins, and a host of family and friends. To send flowers or plant a tree in memory of Pierre Antoine Bouchereau, please visit Palmer Memorial Chapel in Columbia, South Carolina. https://www.palmermemorialchapel.com

The family of Mr. Pierre Antoine Bouchereau created this Life Tributes page to make it easy to share your memories.

The funeral Mass for Pierre Antoine Bouchereau will be held 10:00...

Send flowers to the Bouchereau family.