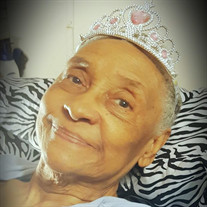 The Lord sent his angel of mercy and kindness to grant our loved one eternal rest on Friday, March 9, 2018, at her home in Sumter, South Carolina. Mrs. Queen Esther (Anderson) Grady was born on October 20, 1936 in Switzerland, SC, to Earnest Anderson Sr. and Winnie Bell Dobson Anderson. She attended the public schools in Jasper County at Ridgeland High School. At an early age, she accepted Christ as her personal Savior and joined Carey Hill Baptist Church under the auspices of the late Rev. C. Patterson. A true lover of family, Queen spent much of her childhood caring for her ill mother and helping to care for her siblings. Mrs. Grady was joined in wedlock to late Mr. Henry Spann, Sr. and to this union, nine children were acquired. On April 24, 1969, she happily married the late Tommy W. Grady, a United States Air Force Officer, who was a loving and devoted husband and father up until his passing in 1982. During their time, they traveled to places like Germany, the Netherlands, Amsterdam, Denmark, and many stateside cities. Mrs. Grady was employed for a number of years at Crescent Tools in Sumter. After her retirement, she delved into a number of hobbies to include: playing bingo, fishing, reading, cooking, crossword puzzles and nature watching. However, what she enjoyed most was helping and being a source of light and wisdom for her family, especially her grandchildren or anyone in need. In addition, Mrs. Grady would often donate to local community organizations like the Firefighters and the Sheriff’s Department. She would also contribute funds to a daily breakfast ministry in her town. Mrs. Grady was preceded in death by her husband, Mr. Tommy W. Grady; one daughter, Barbara Spann; five sons: Henry Spann, Jr., Donald Anderson, Howard Spann, Billy Spann and Eric Spann; one sister, Arthur Lee Johnson; four brothers: Ivory Anderson, Earnest Anderson Jr., Frank Anderson and Elvede Anderson, Mrs. Grady leaves to cherish her precious memories, one son, and three daughters: Allen (Gwendolyn) Spann, Sumter, SC; daughters: Gail (Lee) Brown, Estell, SC, Gwendolyn (Hodges) Drake and Marie Grady all of Sumter, SC; a host of grandchildren, great-grandchildren and one great-great grandchild; one sister, Mary Simmons, Killeen TX; one brother,John Anderson, Ridgeland, SC; nieces,nephews, cousins and other relatives and dear friends. Naturally our hearts are filled with sorrow and the tears at the thought of our loved one being taken from us, but let us still our grief long enough to give God thanks for a life well lived.

The Lord sent his angel of mercy and kindness to grant our loved one eternal rest on Friday, March 9, 2018, at her home in Sumter, South Carolina. Mrs. Queen Esther (Anderson) Grady was born on October 20, 1936 in Switzerland, SC, to Earnest... View Obituary & Service Information

The family of Queen Esther Grady created this Life Tributes page to make it easy to share your memories.

The Lord sent his angel of mercy and kindness to grant our loved...

Send flowers to the Grady family.