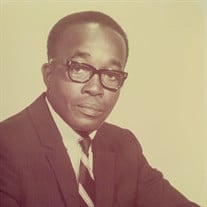 Raleigh W. McCoy entered into eternal rest on Thursday, September 29th, 2016 at his home in Sumter, he was 97. Raleigh was born October 1, 1918 in Alcolu, South Carolina, one of nine children to the late James and Mary Alice McCoy. James was a blacksmith and a farmer and Alice was a homemaker. Raleigh graduated from Lincoln High School in Sumter, SC and matriculated to Johnson C. Smith University, Charlotte, NC. He left school to follow his brother Taft to New York, becoming a part of the Great Migration. He spent a short time working as a shoe shine boy in a barbershop, before getting hired as a clerk in the U.S. Post Office. Always putting a high value on education, he enrolled at City College of New York, where he earned his Bachelor Degree in Education. When his sweetheart, Arthuree, finished college, he went back to Sumter to ask for her hand in marriage. Raleigh married Arthuree Neely in 1943 and together they raised their children, Raymond and Linda in the Bronx, New York. In 1957 they moved to their new home in Jamaica, New York. Raleigh continued his studies and earned his Master’s Degree in Education and earned an Advanced Certificate in Educational Administration and Supervision from Brooklyn College of New York, City. He retired from the U.S. Post Office and started a second career as a 4th grade teacher in the New York City Public Schools and loved it. While he was always a very quiet and gentle man, his personal library and the power of what he read revealed that there was nothing meek about the way he thought. He commanded his world with quiet nudges, careful moves, laughter and unyielding love. Raleigh’s faith was the cornerstone of his spirit. He studied his Bible and raised his family in the ways of the church. He was a member of Second Presbyterian Church of Sumter, where he served as an Elder and member of the choir. He loved singing, and often wrote jingles. He won several contests for the jingles he wrote. He also enjoyed fishing, crabbing and dancing- once earning the title "Electric Slide King" on the cover of the newspaper. After his wife passed, Raleigh found comradery in the Omega Psi Phi fraternity, Inc., becoming at the time, the eldest person to pledge Gama Iota Chapter, Inc. organization. He enjoyed summers working at Camp A.M.I.G.O., a summer camp for boys. While in New York, he also served as a Boy Scout leader.. A well-traveled man, Raleigh McCoy visited Canada, England, Ghana, Spain, Egypt, Morocco and Spanish Morocco. in addition to his parents and spouse, he was preceded in death by, one sister Isabel Taylor and seven brothers, Marion , Adam, Taft, Henry, Jerry, James and Irvin. Raleigh was a beloved father of two children, Raymond Alan McCoy, Sacramento, California, and Linda McCoy, ( Kwame ) Kumi, Mataheko-Tema, Gahana, Africa; grandfather to six grandchildren, Mark McCoy, Akosua Kumi , Erina M. Tandy, Kwabena (Camile) Kumi ,Allison (Charlie) Kozel and Arthur McCoy; 14 great-grandchildren, Lazai Anderson, Zachary Anderson , Makeda Maria McCoy, Dayvon (Maine) Chestnut, Latrice Hogan, Elijah Kumi , Noah Kumi, Nyles Davis, Macie Tandy, Cole Tandy, Maxwell Kumi, Myles Kumi, Patrick Kozel and Leona Kozel; two great-great-grandchildren, Tremaine Lindsey and Amir Williams, and a host of other relatives and friends . In lieu of flowers, memorials can be made to: Second Presbyterian Church (USA) 1125 Old Pocalla Road Sumter, SC 29150 or to the Arthuree McCoy Scholarship Fund Morris College 100 West College Street Sumter, SC 29150

Raleigh W. McCoy entered into eternal rest on Thursday, September 29th, 2016 at his home in Sumter, he was 97. Raleigh was born October 1, 1918 in Alcolu, South Carolina, one of nine... View Obituary & Service Information

The family of Raleigh W. McCoy created this Life Tributes page to make it easy to share your memories.

Send flowers to the McCoy family.