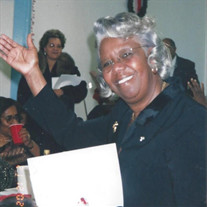 Ms. Rebecca M. Edmonds was born December 29, 1937, in Columbia, South Carolina. She was the sixth child of seven children of the late Mr. June “June Bug” and Mrs. Florine Fabor Edmonds. She lost her battle with ovarian cancer on Thursday, September 21, 2017, at her home. “Beck” and/or “Auntie” as she was affectionately called by family and friends, was educated in the public schools of Richland County and graduated from C.A. Johnson High School, Class of 1956. She was employed by many businesses in the Columbia area, but for the longest at Sears and Roebuck, Company. She was a dedicated worker and managed the second floor of Sears at Columbia Mall until she retired. She became a member of the household of faith, First Nazareth Baptist Church in May 1953. Dr. W. H. Neal was the pastor and baptized her. She joined the Musical Choir. In September 1989, she became a member of the Senior Missionary Society, now the Missions Ministry, where she served in several capacities. She was a member of the FNBC Sunday Church School where she served as a Class Secretary. She also served as a member of the Women’s Cooperative Missionary Societies Union, where she served as Chairperson of the Financial Committee; in addition, she volunteered at the Brian Center/Carolina Center/Pruitt Center every 3rd Saturday. She enjoyed reaching out to others, and as a result was a committed missionary for the Lord. She was a member of the Progressive National Baptist Convention, Women’s Department, where she served as an usher, and was also the Trip Coordinator for FNBC members that traveled to the convention. She was a member of the BSF (Bible Study Fellowship) that is held every Thursday at Shandon Baptist Church. She was a member of the Women’s Baptist Educational and Missionary Convention of South Carolina, where she served on the Musical Choir, in addition to being active in her community. In addition to her parents, “Beck” was preceded in death by her parents; an infant daughter; and the father of her daughter and son, Mr. James “Joe” Cowan; four brothers: MSG Elijah Edmonds, Mr. Joseph Edmonds, Deacon Benjamin Edmonds, and Mr. June Samuel Edmonds. Those left to cherish precious memories include her son, Deacon James (Rolandra) Edmonds of whom she was so proud; and one granddaughter, Diamond RoJai Edmonds; her two loving sisters: Earnestine Edmonds James and Evelyn Edmonds (her caregiver); two nieces/caregivers: Louise Edmonds Tucker and Averyl Edmonds; two sisters-in-law: Lucille Edmonds and Camille Edmonds; and a host of nieces, nephews, other relatives, and friends who will miss her dearly.

Ms. Rebecca M. Edmonds was born December 29, 1937, in Columbia, South Carolina. She was the sixth child of seven children of the late Mr. June &#8220;June Bug&#8221; and Mrs. Florine Fabor Edmonds. She lost her battle with ovarian cancer on... View Obituary & Service Information

The family of Rebecca M. Edmonds created this Life Tributes page to make it easy to share your memories.

Send flowers to the Edmonds family.