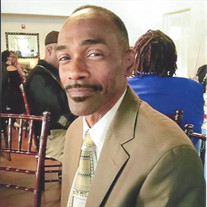 Reginald Darnell Romeo, of Columbia, South Carolina, departed this life on Sunday, June 30, 2019, in Columbia, South Carolina. Born August 31, 1960 in Pinewood, South Carolina, he was the son of Gladys Romeo and the late Joseph Elliott Mitchell. He was affectionately called Romeo by all, but simply called Babe by his beloved wife. Romeo was educated in the Sumter School District where he was a 1978 Honor Graduate of Maywood High School. While in school, he served as Student Body Vice-President (1977), Student Body President (1978) and also participated in track where he was All-Conference and named MVP in 1978. Romeo furthered his education at the University of South Carolina where he was a member of Alpha Phi Alpha Fraternity, Incorporated. He was employed as a Maintenance Supervisor with the University for twenty-seven years and with Food Lion for twenty-three years. At an early age, Romeo gave his life to Christ at Cherryvale Baptist Church in Sumter, South Carolina. He later joined St. John Baptist Church in Columbia, South Carolina, where he was a member of the Kimpson/Lewis/Price Family Ministry Unit. Romeo was a regular participant in the Hopeful Dinner Ministry. Romeo was an avid gardener who enjoyed spending time in his yard. He loved landscaping and planting a variety of flowers, plants, and shrubbery. A Master Griller and Chef, Romeo took pride in displaying his culinary skills at family events. In addition to his father, Romeo was preceded in death by his maternal grandmother, Adelia T. Davis of Chesapeake, Virgina; an aunt, Cora M. Lee of Portsmouth, Virginia; one uncle, Otis McConico of Pinewood, South Carolina; and a much beloved nephew, Dominic Montrell. He leaves to cherish precious memories his loving wife of twenty-five years, Pamela Romeo of the home; three children: Reginald Montrell Romeo, II, Titus L. Thompson, and Terelle Thompson-Greene, all of Columbia; five grandchildren: Shannon Lamar Thompson, Jordan McKenzie Thompson, Josie Alexandra Greene, Titus Thompson, Jr., and Ty’asia Thompson; his mother, Gladys Romeo of Sumter; a sister, Valarie Romeo (life partner Robert) of San Diego, California; a brother, Joseph (Betty) Romeo of Sumter; a very dear friend raised in the home as a brother, Anthony (Diane) Rose of Harrisburg, North Carolina; and a host of other loving relatives and dear friends.

The family of Reginald Darnell Romeo created this Life Tributes page to make it easy to share your memories.

Send flowers to the Romeo family.