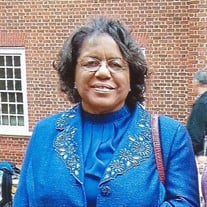 Life Reflections of Rhunetta D. Pitts Jesus said unto him, I am the resurrection and the life: he that believeth in me, though he were dead yet shall he live. And whosoever liveth and believeth in me shall never die.” John 11:25-26 Rhunetta Dupree Pitts, daughter of the late Leon and Annie L. Pearson Dupree, was born on July 23, 1939 in Sumter, South Carolina. Rhunetta was educated in the public schools of Sumter County and graduated from Lincoln High School in 1957. She earned a Bachelor of Science Degree in Elementary Education from Morris College in 1961 and a Master’s Degree in Education from the University of South Carolina. As she furthered her education, she also earned an Education Specialist certification. Rhunetta’s service to the community in education spanned 33 years. It began during the 60’s at Savage Glover, a segregated school. As times changed and the district began gradually integrating some of the schools, she was one among the few selected to integrate Millwood Elementary School, where she taught mostly 4th grade math. She rendered service to Sumter School District 17 until retirement in 1995. After 4 years of retirement, she briefly returned for a year to the classroom in Lee County as a 3rd grade teacher. Even throughout her retirement, she was committed to serving the children in our community by tutoring, volunteering, and assisting parents with childcare. Rhunetta was a faithful, active, life-long member of Union Station A.M.E. Church. As she grew up in the church, she developed a spiritual awareness of God’s word in loving and serving others. These attributes were not only learned at church, but were demonstrated daily within the home. The family attended church regularly and Rhunetta knew when it was time to dedicate herself to the Lord. As a committed member of Union Station A.M.E. Church, she served in many capacities from her youth to adulthood. From her early years, she sang in the church choir, was a member of the Usher Board, and served on the ACE League, now known as the YPD. As an adult, she served as a member of the Steward Board and a Stewardess. With her love of educating the youth, she also served as a committed Vacation Bible School teacher and a tutor during the school year. It was through her dedicated work with the church that she was selected to become the President of the Gardenia Brogdon Women’s Missionary Society for an 8-year tenure. During this time, she was instrumental in developing the unit system for the society, the first Saturday monthly breakfast meetings, and the development of the Lerlene Redden Scholarship Fund. With her leadership, the membership grew and became more involved in the area and conference activities. There are fond memories of the conference gatherings and the missionary retreats. The life of Rhunetta will continue to shine through her husband of sixty years, Samuel Pitts; her son, Rodney Rydell Pitts of Sumter and her daughter, Denise Pitts (Samuel) Addison of Charlotte, NC; five grandchildren: Zachary Clayburn Pitts, Nicholas Rydell Pitts, Moriah Denise Addison, Rodney Daniel Pitts, and Miranda Dupree Addison; one sister, Mae Thelma Dupree Meggie of Sumter; daughter in law: Jere Daniels Pitts; nieces: Joycelyn McCants and Regina McCants; nephews, Derrick Meggie, Jared McCants, Russell "Rusty" Meggie and Reginald "Reggie" McCants and many special grand nieces and nephews, cousins and friends. In addition to her parents, she was preceded in death by two sons: Samuel Leon "Len" Pitts and Karl Stuart Pitts; and one sister, Darnella Dupree McCants.

Life Reflections of Rhunetta D. Pitts Jesus said unto him, I am the resurrection and the life: he that believeth in me, though he were dead yet shall he live. And whosoever liveth and believeth in me shall never die.&#8221; John... View Obituary & Service Information

The family of Rhunetta Dupree Pitts created this Life Tributes page to make it easy to share your memories.

Life Reflections of Rhunetta D. Pitts
Jesus said unto him, I...

Send flowers to the Pitts family.