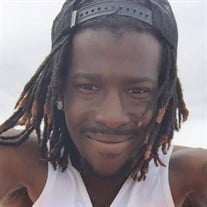 Ricky Bernard Thomas, II transitioned Monday, May 27, 2019, at Prisma Health Richland in Columbia, SC. Born at Fort Polk, LA, he was the third of four children born to Ricky and Teresa Carolina Thomas. A 2008 graduate of Blythewood High School, he was a cornerback on the varsity football team, Blythewood Bengals, who went undefeated his senior season. Ricky was also a percussionist with the Blythewood Marching Band where he played the bells and snare drum as well as the guitar. He was passionate about all sports, but his favorites were the New Orleans Saints and the LSU Tigers. Proud to claim his Louisiana heritage, he loved the Ragin' Cajuns. After graduation, Ricky attended USC-Columbia, where he majored in Engineering. After a year, he made the decision to enlist in the United States Army to defray college costs. Upon completion of his Basic Training at Fort Sill, OK, and additional AIT training at Fort Gordon, GA, he worked as a satellite communications system operator assigned to Fort Campbell, KY, then to Afghanistan. After 2 tours, he was honorably discharged, and enrolled into a nursing program. Although he traveled extensively, Ricky also staycations. A caring, sensitive, witty, and engaging personality, Ricky was loving, family-oriented, adventurous and loved life. Some of his favorite pastimes included running, boxing, softball, and baseball. He excelled in each endeavor and was a great and loving father. Ricky was preceded in death by a brother, Levar Carolina. Surviving are his three sons: Rylan Thomas, Jaxon Thomas, and Zaeryn Miller; daughter Rayna Thomas; parents Ricky Bernard and Teresa Thomas; two sisters: Tonza Thomas and Christina Thomas; paternal grandmother Bobbie Jean Thomas; maternal grandmother Oleta Pearson; special grandfather Richard Blanding; three aunts: Gloria (Schuyler) Porter, Cassandra Thomas, and Michele Liburd; three uncles: James Thomas, Maurice Thomas, and Rodney (Tanya) Abram; niece Vanessa Thomas; and other relatives and friends.

The family of Ricky Bernard Thomas, II created this Life Tributes page to make it easy to share your memories.

Send flowers to the Thomas, family.