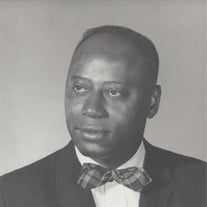 Robert “Duke” Brown of Camden, SC. died Friday, March 4, 2016 at the Kershaw County Hospital. Born in Orange, New Jersey, he was the son of the late Quintella Robinson and Union Brown. He married Bernard Brogdon and they were blessed with a son, Robert D. Brown, Jr. and a daughter, Erica B. Brown. Mr. Brown was a graduate of Johnson C. Smith University where he majored in Biology. He earned a Master’s degree in School Administration from New York University and completed further studies at Rutgers University and Seton Hall in New Jersey. Robert "Duke" Brown was hired at the age of 22 by Johnson C. Smith University as the Assistant Football Coach and later was the Assistant Football Coach at Howard University. He became the Head Football Coach at Morris College in Sumter. Coach Brown was also Head Football Coach at Shaw University in Raleigh, NC. He was commissioned as a First Lieutenant, active duty in the United States Army and continued to serve as an Officer in the Reserve Corps. After returning to Orange, New Jersey, Mr. Brown served as Director of Education for the public schools of Newark, NJ and retired as Assistant Executive Superintendent of Schools. After retirement, he moved to Camden, SC where he was Chairman of the Kershaw County Political Caucus. Mr. Brown was one of the first Trustees of Coastal Carolina University. Coach Brown was named the “Father of Football” at Coastal Carolina University and was honored with the naming of the Robert "Duke" Brown Hall of Champions in the University’s Adkins Field House. In addition to these honors, he received numerous awards and recognitions for his outstanding contributions to education, community and football. Duke Brown was a member of the Omega Psi Phi Fraternity. He is survived by his beloved wife of 62 years, Bernard Brogdon Brown of Camden; his son, Robert D. Brown, Jr. and daughter Erica B. Brown, both of Camden, SC; a granddaughter, Nia C. Brown and grandson, Robert D. Brown, III of Raleigh, NC.

Robert &#8220;Duke&#8221; Brown of Camden, SC. died Friday, March 4, 2016 at the Kershaw County Hospital. Born in Orange, New Jersey, he was the son of the late Quintella Robinson and Union Brown. He married Bernard Brogdon and they were blessed... View Obituary & Service Information

The family of Robert "Duke" Brown created this Life Tributes page to make it easy to share your memories.