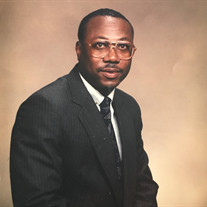 Robert Earl Dantzler was born January 18, 1952, the tenth of eleven children born to the late Jimmy Clay and Corine Edwards Dantzler. As the sun set on March 5, 2017, Mr. Robert shed his earthly clothes to go home to his heavenly father. Mr. Robert was born in Tabor City, North Carolina. He graduated from Tabor City High School in 1970 and attended Southeastern Community College in Whiteville, North Carolina. At an early age, he confessed his sins, was baptized, and began his Christian walk at First Baptist Church in Tabor City. In 1985, he moved his membership to Zion Chapel Baptist Church No. 1 and was a regular attendee until his health began to decline. Mr. Robert was a devoted husband and father. He was so proud of his son and daughter. He worked diligently, sometimes two jobs, to ensure their needs and wants were met. Due to his failing health, Mr. Robert retired in 2014 from Central Issue Facility at Fort Jackson where he was so dedicated and hardworking that he was named "Employee of the Year" in 2004. During his working years, he was also employed by Yorkshire Industries in New York, South Carolina Department of Corrections Kirkland Correctional Institute, the San Antonio Jail in San Antonio, Texas, and Toys-R-Us in Birmingham, Alabama, and Columbia, South Carolina. In addition to his parents, Mr. Robert was preceded in death by three sisters: Mrs. Virginia Hightower, Mrs. Mary Moore, and Mrs. Louise Fountain; and two brothers: Mr. Jimmy Clay Dantzler Jr. and Mr. Eugene Dantzler. He is survived by his wife of 31 years Major (Ret.) Sheila C.Dantzler; his daughter Ms. Angelica L. Dantzler of Winston-Salem, North Carolina; his son Mr. Marclay Dantzler of Charleston; three sisters: Mrs. Vertel Forrest of Orangeburg, Mrs. Peggy Floyd of Fayetteville, North Carolina, and Mrs. Margaret (Homer) Grimes of Clayton, North Carolina; two brothers: Mr. Donald (Arwilda) Dantzler of Columbia and Mr. Ronald Dantzler of Fayetteville; one sister-in-law Mrs. Sharon C. Smith of Charlotte, North Carolina; and a host of nieces, nephews, and cousins who will miss him dearly.

The family of Robert Earl Dantzler created this Life Tributes page to make it easy to share your memories.

Send flowers to the Dantzler family.