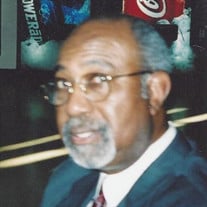 On Thursday, August 29, 2019, the Lord reached down to take another of His children away from earthly labor home to heavenly reward. Robert Johnson breathed his last at his residence in Columbia with his beloved wife at his side. Born on December 28, 1938, in St. Stephen, South Carolina, Robert was a son of the late J.B. Johnson and Eva Muckelvaney Johnson, as well as the husband of the former Joan Hanna of Philadelphia, Pennsylvania. Robert attended public school in St. Stephen, South Carolina, and graduated from Russellville High School in the Class of 1956. He went to New York to find employment and was subsequently drafted into the US Army. After his tour of duty, Robert returned to South Carolina and attended South Carolina State College (now South Carolina State University) where he earned a Bachelor’s degree in Business Administration. He worked at various institutions as Business Manager including: Claflin University in Orangeburg, South Carolina; Voorhees College; and Denmark Technical College, both in Denmark, South Carolina. He also obtained a business internship at Hampton Institute (now Hampton University) in Hampton, Virginia. Upon completion of his internship, he was employed by Livingston College in Salisbury, North Carolina, as Business Manager. Upon his eventual return to South Carolina, he was employed as Business Manager by the South Carolina Arts Commission for twenty-two years until his retirement. While employed there, he simultaneously opened RJS Tax and Accounting Service, which he operated for twenty years. He was known in the community as the “Tax Man.” He was a founding member of I DeQunicey Newman United Methodist Church. He has served in various positions in that church including: the United Methodist Men; the Men’s Choir; and Church Treasurer. Robert was devoted to his alma mater and considered himself a true “Bulldog.” He loved SC State football and never missed a home game or Homecoming for forty years. He loved to golf, which was his favorite recreational activity. Travel was also one of his favorite pastimes. He enjoyed being with his friends whether it was at football games or just to fellowship with good times. He leaves to cherish precious memories, his beloved wife of fifty years, Joan of the home; two sons: Robert Johnson, III, and Julian B. (Walletta) Johnson, both of Columbia, South Carolina; five grandchildren: Alexis Johnson, Wisdom Johnson, Julian Johnson, II, all of Columbia, South Carolina, and Jordyn Johnson of Winder, Georgia; Gregory Johnson, who was like a special brother; and a host of other relatives and friends.

On Thursday, August 29, 2019, the Lord reached down to take another of His children away from earthly labor home to heavenly reward. Robert Johnson breathed his last at his residence in Columbia with his beloved wife at his side. Born on December... View Obituary & Service Information

The family of Robert Johnson created this Life Tributes page to make it easy to share your memories.