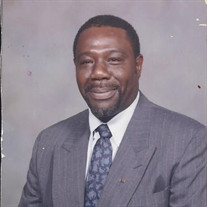 Robert Edward Lebby transitioned from this earthly realm to his heavenly home at the Warriors Walk Hospice Center of the Dorn Veteran Affairs Medical Center Wednesday, February 28, 2017. Born in Denmark, South Carolina, to the late Edward Emerson Lebby and the late Irene Barbara Johnson Lebby on June 9, 1947, he was the eldest of six children, followed by four brothers and a sister. His early life was spent in Dixiana, Cayce, and Charleston with attendance in the public schools of Lexington and Charleston Counties. Robert graduated from Lakeview High School, Class of 1965 after which time he attended the University of South Carolina and Benedict College where he studied business administration. A veteran who served honorably in the United States Air Force from 1965 – 1968, Robert was stationed on the South Pacific island of Guam as well as in Japan. As a civilian, he worked as a switchman for Norfolk Southern Railroad and retired after more than twenty years of service. A lifelong member of Mt. Pisgah AME Church where he served in the Men’s Choir, Robert was also a member of the Veterans of Foreign Wars. In addition to being sports enthusiast who enjoyed fishing, Robert also delighted in woodworking, reading, and auto mechanics. Additionally, time spent with his family, childhood friends and classmates was particularly relished. In addition to his parents, Robert was preceded in death by his sister, Sandra Lebby. Robert leaves to cherish precious memories and legacy his wife and caregiver Mrs. Mary Purdie Lebby of the home in Gaston; three children: Yvette M. Lebby of Little Rock, Arkansas, Bernadette S. (Jonathan L.) Seay of Lexington, and Danny Purdie of Columbia; six grandchildren: Sherrod Brown of West Columbia, Shaquille Seay, Ebony Seay, and Terell Seay, all of Lexington, Nasir Purdie and Nyasia Purdie, both of Columbia; four brothers: Gerald W. Lebby of West Columbia, Larry F. (Gloria H.) Lebby and Kenneth B. Lebby, both of Columbia, and Gary L. (Kathy R.) Lebby of Oak Ridge, North Carolina; an aunt, Kathleen Lebby Faust of Denmark; a former sister-in-law, Reverend Freddie Mae Lebby of West Columbia; and a host of nieces, nephews, cousins and friends.

The family of Mr. Robert Edward Lebby created this Life Tributes page to make it easy to share your memories.

Robert Edward Lebby transitioned from this earthly realm to his...