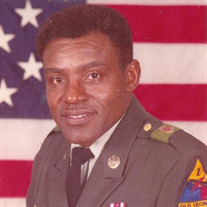 Tuesday, May 26, 2020, the Lord sent his angels to call another soldier home to rest. Robert McElroy passed away peacefully after a heroic battle with Parkinson's Disease a week before his 80th birthday. Born in Port Saint Joe, Florida, on June 3, 1940, he was the son of the late Henry Riley and Eldest Speights. At the age of 17, Robert joined the United States Army and served in the Reserves for seven years. After serving in the Reserves, he went to barber school in Miami, Florida. He returned to active duty in 1967, where he created a distinguished career until his retirement in 1990. In 1959, Robert met Betty Parker. The two married in 1960 and went on to have three children: Robert LaMonte, Robin Lorraine, and Jessica Niccole. Robert accepted the Lord as Savior in 1977 while on assignment in Germany. Like his dedication to his Army career, Robert served the Lord faithfully for the remainder of his life. He loved to read the Word of God, teach Bible study, and tell others about the Gospel. He touched the lives of many through his living testimony of God's grace. Robert loved his family, his country, and his church Christ Center in West Columbia, South Carolina. After retiring from the military, Robert went on to a career with with the SC Department of Corrections, where he headed Emergency Management for the prison system. Throughout his life, Robert lived with the notion, "I can do that with a little practice." In addition to his parents, Robert was preceded in death by his brother Lemon McElroy, Jr. He leaves to cherish precious memories his beloved wife of sixty years Betty; his three children: Robert (Anne) McElroy of Vermont, Robin (Joe) Dixon of Holly Springs, North Carolina, and Jessica (Ervin) of Columbia; seven grandchildren: Tristian, Trystal, Taylor, Maiah, Jordyne, Ashley and Aaren; an aunt Ida Mae Sylvester; an uncle Lamar Speights; and a host of cousins.

Tuesday, May 26, 2020, the Lord sent his angels to call another soldier home to rest. Robert McElroy passed away peacefully after a heroic battle with Parkinson's Disease a week before his 80th birthday. Born in Port Saint Joe, Florida, on... View Obituary & Service Information

The family of Robert McElroy created this Life Tributes page to make it easy to share your memories.

Send flowers to the McElroy family.