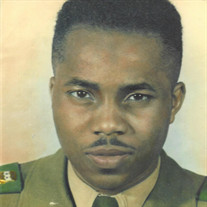 SSgt (Ret.) Robert Henry Richards departed this earthly life for his heavenly home, Friday, September 16, 2016 at the WJB Dorn VA Medical Center after a lengthy illness. Born to the union of William, Sr., and Lillian Holman Richards on February 7, 1930, he was blessed to be reared in a loving home with several siblings. After matriculating in the Orange County Public School system of North Carolina, he obtained an Associate's Degree in Business from Columbia Commercial College after which he served his nation honorably for over 20 years in the US Army. It was during this time that Robert met and married the former Dorthy Lee Poteat; their 54-year union was blessed with 3 children. Robert also nurtured his faith over those years at Gunter's Chapel Baptist Church in Columbia, SC, where he served faithfully as a member of the Gospel Choir. In addition to his parents, Robert was preceded in death by his siblings: sister Mary Louise, and 4 brothers: Walter, Jr., Clyde, Claude, and John Thomas. Robert leaves to forever cherish his precious memories his loving wife Dorthy; 3 children: Robert Henry Richards, Jr., Angela (Michael) Richards-Kearney, and Jeffrey (Jovelyn) Richards; 3 grandchildren: Khalil J. Richards, Conner W. Richards, and Jaylen P. Richards; 3 brothers: William Richards, Sterling Richards, and Clarence Richards; 2 sisters: Ollie Mae Macklin and Catherine Huitt; and a host of nephews, nieces, extended family and friends who will all miss him dearly.

The family of SSgt (Ret) Robert Henry Richards created this Life Tributes page to make it easy to share your memories.

Send flowers to the Richards family.