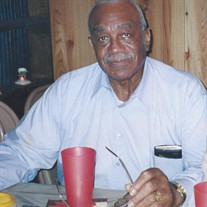 Roland H. Davis, Jr., affectionately called Dave, departed this life on December 20, 2018, at Rice Estates in Columbia, South Carolina. Born in Charleston, South Carolina, on January 23, 1931, he was the youngest of three children born to the late Roland and Martha Lance Davis. Growing up in Pawleys Island, South Carolina, Dave attended and graduated from Faith Memorial School where he played football. During high school, he was employed at the Gay Dolphin Gift Cove as well as several restaurants in Myrtle Beach, South Carolina. Upon graduation, he entered the United States Air Force and served both in the continental United States and overseas, including the Far East and the European Theatre. During his tenure in the Air Force he served as a police officer from 1953 until his retirement in 1973. After retirement, Dave attended Sumter Technical College and graduated with two Associate Degrees. He found employment as an insurance salesman, and later worked as an automotive sales associate with Western Auto for ten years. After leaving Western Auto, he served as a Sumter County Magistrate for several years with much distinction. He considered being a Drivers' Education teacher at Ebenezer High in Sumter School District Two (of which he was a founder) as one of his great joys in life. A devoted church officer, Dave served Wayman Chapel AME Church in multiple capacities, including: Steward; Class Leader; and member of both the Jubilee Gospel Choir and the Male Chorus. Additionally, he was a past Worshipful Master of Catchall Lodge #425 of Dalzell, South Carolina; as a member of the Veterans of Foreign Wars, he regularly attended monthly meetings and placed flags on the graves of all military service men and women. Each year at Christmas, Dave sent cards with donations to members of his church family. A tireless contributor to the development and enhancement of the youth, Dave modeled right behavior and mentored countless youth through the Knights Pythagoras. He was a humble selfless leader of character who always led from the front and never asked more of anyone than he would expect of himself. A devoted family man, Dave loved spending time with his three granddaughters, Ronda, Chelsee and Jessica, always ensuring to present a dapper appearance when he left home, whether to go to a doctor appointment or to church, but especially when with his girls. He loved watching football and wrestling, and took great pride in having a well-kept yard. He was fastidious in organizing everything in his home, from his clothes to groceries, and he was a food connoisseur. When well, each year at Christmas, Dave made a half a dozen fruit cakes that he shared with others; Audrey, Darrell and Ronda hold many fond memories of times in the kitchen helping to prepare those wine soaked fruitcakes. Always exemplifying a strong-willed spirit, with a fervent faith in God, Dave enjoyed listening to and singing gospel music. In addition to his parents, Dave lost his devoted wife, the former Lottie Brown, after fifty-seven years of partnership together in March of 2013, and a sister, Marian Brown, to death. He leaves to cherish precious memories two beloved children: Audrey (Ron) Bright and Darrell (Kathy) Davis, both of Columbia, South Carolina: three granddaughters: Ronda C. Bright of Los Angeles, California, Chelsee Davis, and Jessica Davis, both of Sumter, South Carolina; his older sister Mrs. Arthur Lee Jenkins of Piscataway, New Jersey; his very special nephew George (Susan) Brown, who was a devoted caretaker and confidante; a nephew Julian (Virginia) Brown, Jr.; three nieces: Terry (Curtis) Jordan of Charlotte, North Carolina, Valerie Rice of Piscataway, New Jersey, and Gladys (Robert) Brown of Columbia; a brother-in-law, Julian Brown, Sr.; a beloved first cousin Vivian Smalls of Pawleys Island, South Carolina; and a host of nieces, nephews, two godchildren, and other relatives and his church family and friends.

Roland H. Davis, Jr., affectionately called Dave, departed this life on December 20, 2018, at Rice Estates in Columbia, South Carolina. Born in Charleston, South Carolina, on January 23, 1931, he was the youngest of three children born to the... View Obituary & Service Information

The family of Roland Howard Davis, Jr. created this Life Tributes page to make it easy to share your memories.

Send flowers to the Davis, family.