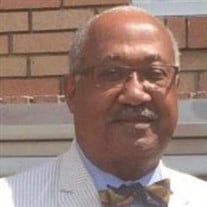 Romeo Watkins entered eternal rest on April 30, 2020 at his residence in Columbia, South Carolina. Born in the Ridgewood community of Columbia, South Carolina on February 7, 1939 he was the son of the late Deacon Leroy and Beatrice Harris Watkins. In 1961, he married Annette Caughman of Columbia, South Carolina. The third child of eight, Romeo grew up in a loving home, anchored by a close-knit community, and deeply rooted in the church. His maternal grandmother, Agnes Harris, who lived next door, played an important role in the rearing and molding of Romeo and his siblings. He often told stories of traveling every summer with her to her hometown of Bronson, Florida. His maternal aunt, Mrs. Franklin Scott Harris, also played an important role in Romeo’s upbringing. A favorite nephew, he often stayed with “Aunt Franklin” at her home across the street from the SC Governor’s Mansion. He was educated in Richland County schools, attending Ridgewood Elementary School, and Booker T. Washington High School. Romeo received his early Christian training in the home and was a life-long member of Ridgewood Baptist Church, joining as a child under the pastorate of Rev. Z.E. Dennis. As a youth, he was a member of the church’s first Junior Choir. He forged a friendship with Rev. Jeremiah Witherspoon, Rev. Dennis’ successor, that spanned over sixty years, enduring even after Rev. and Mrs. Witherspoon relocated to Pennsylvania. Romeo’s service to Ridgewood Church continued during the forty-year pastorate of Rev. Dr. L.C. Chavous. A third generation member, he served for many years on the Church History Committee, and was regarded as a historian of the Ridgewood community. While he served in many capacities, Romeo’s greatest joy at church was his long tenure on the Jubilee Choir, where he was Leader, the same role that had been held by his father. He was well known throughout the city for his expert knowledge of shape-note singing and common meter hymns. Romeo learned the value of hard work at an early age. In the mid-1960s, he began work as a civilian at US Army base Ft. Jackson, retiring in 1993. He began barbering as a 10-year old, his first “customer” was his older brother Charles. He owned and operated a barber shop on North Main Street for over forty years. Ever the entrepreneur, he was a successful real estate agent in the 1970s. Known for his impeccable taste and style, Romeo was always fashionably dressed. As a young caddy on Columbia’s segregated golf courses, Romeo developed a love of the game, and he enjoyed playing in golf tournaments across Columbia and throughout the state. He also was former Commissioner of the Eau Claire Youth Baseball League. In his retirement, Romeo loved watching Jeopardy, Heat of the Night, and all old television westerns, with Gunsmoke his absolute favorite. He especially enjoyed the Court-TV shows, particularly the no-nonsense Judge Judy. Romeo leaves to cherish precious memories his devoted wife of fifty-eight years, Annette Caughman Watkins; four children: Quintus (Verdell) Young, Brigitte Watkins Long, Yelberton Romeo Watkins, and Vancito Ethridge Watkins; nine grandchildren: Quintus, Justin, Velicia, Gabrielle, Danielle, Autumn, Alexi, Tori, and Ashlyn; three great-grandchildren: Jamari, Raleigh, and Solomon; and a host of nieces, nephews, other relatives, Meadow Lake neighbors, and close friends. He will be laid to rest at the historic Zion Chapel Baptist #1 Church Cemetery, joining his parents, siblings, beloved grandmother, and in-laws. A Festival of Jubilee Choirs will be held at a later date in Romeo’s memory.

The family of Romeo Watkins created this Life Tributes page to make it easy to share your memories.

Romeo Watkins entered eternal rest on April 30, 2020 at his residence...

Send flowers to the Watkins family.