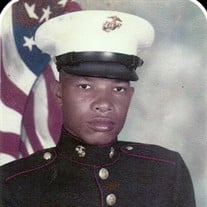 May our Lord Jesus Christ himself and God our Father, who loved us and by his grace gave us eternal encouragement and a wonderful hope, Comfort you and strengthen you in every good thing you do and say. II Thessalonians 2:16-17 Ronald Lee Sanders, husband, a father, and friend, departed this earthly life on October 18, 2016. Born in Sumter County on July 8, 1955, he was the son of the late Russell Sanders Sr. and Daphne Pinckney Sanders. He received his education in the public schools of Sumter County. He was a member of the Future Farmers of America (FFA) in high school. He graduated from Hillcrest High School in 1975. He was a member of the United States Marine Corps. He was formerly employed at Shaw Air Force Base, Becton, Dickinson, and Company (BD) and Department of Motor Vehicles as a Maintenance Worker. Ronald leaves to cherish his memories, his devoted wife Loretta Sanders of 39 years, three children, Daffney (Curtis) Bing of Beaufort, SC; two sons Ronald Sanders Jr. of Rembert, SC and Tyrone (Tasha) Sanders of Montgomery Village, Maryland; nine grandchildren, five siblings: Arthur Pinckney, Hartland, Texas, Reverend Edward (Ethel) Sanders of Rembert, SC, Kelvin Sanders of Rembert, SC, Gregory (Mary) Sanders of Accokeek, Maryland, Rev. Evangelist Francis Sanders of Rembert SC; aunts: Julia Pettyjohn of Rembert SC, Thelma Colclough of Philadelphia, PA, Sadie Singleton of Columbia, SC, Maggie (William) Sheppard of Rembert, SC, Arthuree Johnson of Sumter, SC, Edna Wilson, of Bolton, North Carolina, Evelyn McLeod of Rembert, SC; one uncle Pharrish Pinckney, Sr of North Charleston, SC and grandaunt Angeline Loney of Dalzell, SC

May our Lord Jesus Christ himself and God our Father, who loved us and by his grace gave us eternal encouragement and a wonderful hope, Comfort you... View Obituary & Service Information

The family of Ronald Sanders created this Life Tributes page to make it easy to share your memories.

May our Lord Jesus Christ himself and God our Father,
who loved...