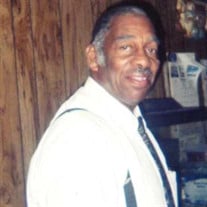 Roosevelt Levy, 86 of Sumter, SC departed his earthly life at Prisma Tuomey Hospital of Sumter SC on Friday, March 4, 2022, after an extended illness. He was the first born of nine children to the late Theodore Roosevelt Levy and Isabel McLeod... View Obituary & Service Information

The family of ROOSEVELT LEVY created this Life Tributes page to make it easy to share your memories.

Roosevelt Levy, 86 of Sumter, SC departed his earthly life at...

Send flowers to the LEVY family.