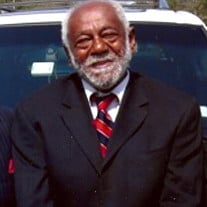 The Ubiquitous Life Reflections Roosevelt &#8220;Ted&#8221; Miller Jr. was born May 5, 1934 in Horatio, South Carolina. He was a loving son to Roosevelt and Elizabeth Dennis Miller, and a devoted brother to Shirley, Wallace, and Celestine. The... View Obituary & Service Information

The family of Roosevelt Miller, Jr. created this Life Tributes page to make it easy to share your memories.

Send flowers to the Miller family.