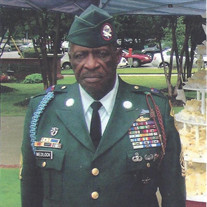 Rufus Medlock, Jr., departed this life on Saturday, October 29, 2016. The son of the late Rufus (Doish) Medlock, Sr., he was born July 3, 1936, in Jackson, Mississippi. Rufus enlisted in the United States Army at an early age in Bismarck, North Dakota, serving his nation honorable for 27 years and retiring with the rank of Command Sergeant Major at Fort Jackson. During his military career, Rufus resided in 17 countries of which his favorite was Australia. His fluency in 6 languages were a boon in his various military occupations including Special Forces, Paratrooper, Medic, Airborne Ranger – Green Beret, as well holding a position on the Delta Force Team/Airborne Infantry 75th Ranger Battalion. He was awarded several honors including a Purple Heart medal, Bronze Star medals, Army Commendation medals, and a Presidential Citation from President John F. Kennedy for his outstanding military service in his enduring sacrifice and bravery shown throughout the Korean and Vietnam Wars. After his retirement from the United States Army, Rufus continued his education and earned Associates in Nursing and Automotive Mechanics. Rufus obtained 32nd degree as a Free and Accepted Mason Scottish Rite Prince Hall and Eastern Star, Chapter 99, Berlin, Germany. Rufus participated in many Karate tournaments since the age of 9 and became an instructor while stationed in Berlin, Germany. He held a third degree black belt in Tak Wond, Fu Gung, and Aum Suke. His tremendous community relations and volunteerism extended to Fairwold Neighborhood Association. He was instrumental in establishing the Combat Veterans of Columbia, SC, at the Veterans Administration as well as being a lifetime voluntary member of the DAV, VFW Golden Knight All Army Parachute Team, and a State Guard Defense Force – National Disaster Team Volunteer. Known as a hard and dependable worker, Rufus earned Employee of the Year honors from the Department of Transportation for his work as a heavy equipment mechanic. Rufus’ favorite hobbies included spending time with friends and family, fishing, Professional Marksmen with the Presidential 100 Shooting Team, the Golden Knight All Army Parachute Team, and as a very loyal fan watching the Dallas Cowboys. Known as a generous giver, Rufus served as a father figure and mentor to many people. He inspired his sons in their military careers, and he continued to give lifelong lessons to all with whom he came in contact. His grandchildren were known as his pride and joy; Rufus captured their minds with the lessons he taught. Their respect and love for him always made him smile. In addition to his parents, Rufus was preceded in death by his wife of 43 years Betty J. Medlock of Columbia, South Carolina, and a son, Rufus Patrick Medlock, of Concord, North Carolina. Loving memories will be cherished by his son Darren R. Medlock of Lorton, Virginia; 6 grandchildren: Jiavanna J. Medlock of Orlando, FL, Taylor J. Medlock, Peytan J. Medlock, and Bryce T. W. Medlock, all of Concord, North Carolina, Kira Medlock of Cincinnati, Ohio, and Kyle Medlock of Lorton, Virginia; a daughter-in-law Sonjinika Y. Medlock of Concord, North Carolina; 3 sisters-in-law: Bertha Ellis of Brooklyn, New York, Fannie Mae (Otis) Priester of Cameron, South Carolina, and Dorothy (Hercules) Brantley of Elloree, South Carolina; 3 brothers-in-law: William (Viola) Irick, Burley (Marie) Irick, Jr., and William (Viola) Irick, all of Cameron, South Carolina; and a host of nieces; nephews; and other loving relatives and friends who will miss his presence dearly.

Rufus Medlock, Jr., departed this life on Saturday, October 29, 2016. The son of the late Rufus (Doish) Medlock, Sr., he was born July 3, 1936, in Jackson, Mississippi. Rufus enlisted in the United States Army at an early age in Bismarck,... View Obituary & Service Information

The family of Rufus Medlock Jr. created this Life Tributes page to make it easy to share your memories.

Send flowers to the Medlock family.