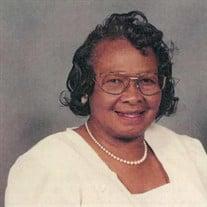 Ruth Thompson Brock departed this earthly life on Monday, August 2, 2021 in Lexington, South Carolina. Born in Sumter County, she was the third of four children born to the late Thomas Jefferson Thompson and Mattie Outen Thompson. She was a devoted and lifelong member of St. Matthews Missionary Baptist Church, where she served on the Gospel Choir, Usher Board, Missionary Board and a Deaconess for over 55 years. Ruth was educated in the Sumter County Public Schools. She worked various jobs and retired from Campbell Soup in 1984. After retirement she continued to assist her husband with administrative work at Lincoln Brock Building and Repairs. She was a smart businesswoman with a strong work ethic and believed in giving people a chance. She ran the Brock Grocery Store before it closed. Ruth also had a passion for service. She was a member of the Sumter Association, the Sumter District United Order of Tents-Pride of Sumter and the Eastern Stars. On February 15, 1948, Lincoln Brock married Ruth Thompson. Through this union, Deacon and Mrs. Brock were blessed with two sons, the late Lincoln Conwell Brock, Jr. and the late John Luther Brock. In February 2008, Deacon and Mrs. Brock were honored with an anniversary dinner, celebrating 60 years of marriage and for every mountain experiences God had brought them through, with family and friends. In addition to her parents, Deaconess Brock was preceded in death by her husband the late Lincoln Brock, Sr., two sons; Lincoln Brock, Jr., and John L. Brock, three brothers and 10 sisters. She leaves to cherish precious memories, a host of grandchildren, great grandchildren, great-great grandchildren, sister-in-Law Flossie Brock of New York; a sister–in-law Agnes Bullock of Ft. Washington, MD, nieces, nephews, other relatives and friends. To access the livestream of the service, please go to Facebook.com, search for Palmer Memorial Chapel Inc., and "like" the page. The livestream video will begin at the designated time of the service.

The family of Mrs. Ruth Thompson Brock created this Life Tributes page to make it easy to share your memories.

Send flowers to the Brock family.