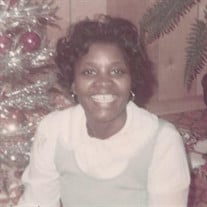 In the early morning hours of December 23, 2019, the Lord sent his angels down to call another soul home to glory. Ruth Naomi Norris Fisher quietly took her last breath at her residence in Columbia, South Carolina. Born September 26, 1933, in Columbia, South Carolina, she was the fifth of seven children born to the union of the late Reverend Hills Norris, Sr. and Lottie B. Jacobs Norris. During her youth, she was a member of Union Baptist Church where she was baptized by the late Reverend Dr. Lincoln C. Jenkins, Sr. She attended Booker T. Washington High School , graduating in the Class of 1953 and went on to earn and Bachelor of Science in Education from Benedict College. In 1962, she married the Reverend Dr. Miles Mark Fisher, IV; to this union, a daughter was born. Ruth worked quite diligently in the public school system for thirty-five years. In her earlier years in education, she worked at James A. Whitted Junior High School in Durham, North Carolina. She later moved to Snow Hill, North Carolina, and worked as a Physical Education teacher and cheerleading coach at Greene Central High School. Ruth also served as an adult education instructor during her time in Snow Hill. She earned various awards and honors for her work in public education and her service to the community. Ruth decided to move her church membership to Martin Luther King, Jr. Memorial Baptist Church. During that time, she was actively involved with various church organizations: VBS Director, Youth Choir, Sunday School Director, Youth Program Director, Treasurer (finance committee), Hospitality Committee, and Pastor’s Search Committee. Once the MLK church merger occurred and became Concord Fellowship Baptist Church, Ruth continued to work diligently in whatever capacity she could. She had a great love and passion for working in the church, outreach, and especially with the youth in the community. She leaves to cherish precious memories her daughter Karen Aileen Fisher Jackson of Rock Hill, South Carolina; two granddaughters: Christina Danielle Jackson of Columbia and Morgan Tristan Jackson of Rock Hill; a brother Albert Louis Norris of Columbia; a host of nieces, nephews, other relatives and friends.

In the early morning hours of December 23, 2019, the Lord sent his angels down to call another soul home to glory. Ruth Naomi Norris Fisher quietly took her last breath at her residence in Columbia, South Carolina. Born September 26, 1933,... View Obituary & Service Information

The family of Ruth Naomi Norris Fisher created this Life Tributes page to make it easy to share your memories.

Send flowers to the Fisher family.