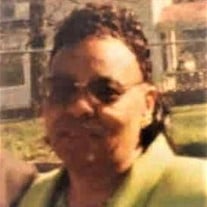 IN LOVING MEMORY OF RUTH LEWIS Ruth Lewis was born November 12, 1940 in Wedgefield, South Carolina to Katie Brown and the late James Brown. She departed this life and entered into eternal rest on Friday, October 4, 2019 in Marietta Georgia. Ruth attended school in the Sumter County Public School Districts. She came to Christ at an early age, as a member of Orangehill RUME Church; which is now Orangehill Independent Methodist Church. As an adult, Ms. Ruth made her way to New York City. She began working at Rockland Psychiatric Hospital, where she worked many years as a dedicated caregiver. While residing in New York, she joined Charity Cathedral International, where she remained a member until her return to Sumter, South Carolina. She later returned to Sumter to care for her ailing mother. Ruth lovingly attended to her mother until she could no longer assist her, due to her own health issues. She re-connected with her home church, the former Orangehill RUME and served faithfully until moving to Georgia. In her spare time, Mrs. Ruth enjoyed, shopping, cooking, traveling and she especially liked calling and talking to her friends on the phone. In addition to her father, James Brown, and husband, Richard H. Lewis, she was preceded in death by two sons: Richard B. Lewis and Andre Lewis. She leaves to mourn her mother, Katie Brown; six children: Marian (Paul) Romero, Yonkers, New York Jacqueline (Derrick) Johnson, Marietta, Georgia, Jermie E. Cozart, Washington, DC, Christopher Lewis, , Bronx, New York, Andrew Lewis, Marietta, Georgia and Taylor Lewis, Columbia, South Carolina; four grandchildren: Jonathan Johnson, Jasmine Johnson, Sydney Cozart, and Jerimiah Hutton; one great-grandchild, Julia S. Johnson; one brother, Charles (Susan) Gayle; two nieces: Marthenia (Malcolm) Lewis, Lashonda (Charles) Capers all of Sumter, South Carolina and a host of other relatives and dear friends. “Gone but not forgotten, out of our sight but always in our hearts; Blessed are the pure in heart for they will see God.”

IN LOVING MEMORY OF RUTH LEWIS Ruth Lewis was born November 12, 1940 in Wedgefield, South Carolina to Katie Brown and the late James Brown. She departed this life and entered into eternal rest on Friday, October... View Obituary & Service Information

The family of Ruth Lewis created this Life Tributes page to make it easy to share your memories.