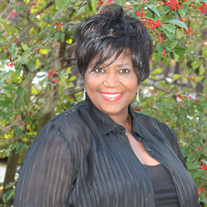 Sabra Walston Mazyck was born January 13, 1952 in Williamston, North Carolina, to the late Mr. Lenard and Mrs. Mary Della Sherrod Walston. She was the youngest of 8 siblings, and was educated in the public schools of Martin County. She later matriculated at North Carolina A & T State University where she graduated Cum Laude with a Bachelor of Science degree in Business Administration. While at NC A & T, she met the love of her life Raymond Mazyck. The two were united in holy matrimony in August 1973 and were blessed with two sons, Raymond II, and Remmele, whom she dearly loved. Sabra exemplified the virtues of a good wife, mother, friend, and neighbor. She truly lived life like it was golden. She saw people and the world through positive eyes, even when there would be circumstances that would be daunting for most people. She was truly a humanitarian and demonstrated her love of people through every aspect of her life. Sabra had a heart of gold and was willing to lend a helping hand where she could. She was involved in numerous civic organizations including: the Pilot Club; Columbiettes; Chair of the Zoning Board; and a former Planning Commissioner for the Town of Blythewood in addition to holding membership in other social organizations too numerous to mention. Sabra was employed in various positions in state government for 28 years. Sabra loved the Lord, who was a constant source of strength and guidance throughout her life. At an early age, she became connected to Green Memorial Disciple Church in Williamston where she accepted Jesus Christ as her Lord and Savior. After marrying and relocating to Columbia, she became affiliated with St. Martin DePorres Catholic Church with her family and later moved her membership to Transfiguration Catholic Church where she lived in Blythewood. She served in various capacities as Extra-Ordinary Minister, Lector, Collection Counter, volunteered in the church office, and the evangelistic team, just to mention a few. She was preceded in death by her parents Mr. Lenard and Mrs. Mary Della Sherrod Walston, and her brothers: John Sherrod Lenard Jr., Jimmy Earl, Raymond, and Fred Edward Walston. Loving memories will always be in the hearts of her beloved husband Raymond; sons: Raymond II, and Remmele; and her daughter in love, Lisandra. The crown jewels of her life were her grandchildren: Jalen, Aaliyah, Gali, and Joshua. Her memory is also cherished by 3 sisters: Mary (Robert, Sr.) Brown, Lorraine Walson, both of Stamford, CT, and Verna Tynes of Woodbridge, VA; 2 brothers: Eddie Floyd (Geraldine) Walston of Florence, SC, and Johnny Mack Walston of Stamford, CT; her mother in love, Mary Mazyck of Charleston, SC; 1 sister-in-law, Priscilla Mazyck of Charleston, SC; 3 brothers-in-law: Vincent (Julie) Mazyck of Charleston, SC, Kevin (Tanya) Mazyck of Atlanta, GA, and Michael (Cathy) Mazyck of Minneapolis, MN; and a host of nieces, nephews, cousins and close friends that will dearly miss her.

Sabra Walston Mazyck was born January 13, 1952 in Williamston, North Carolina, to the late Mr. Lenard and Mrs. Mary Della Sherrod Walston. She was the youngest of 8 siblings, and was educated in the public schools of Martin County. She later... View Obituary & Service Information

The family of Sabra Walston Mazyck created this Life Tributes page to make it easy to share your memories.

Send flowers to the Mazyck family.