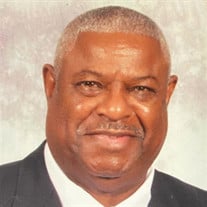 SFC, Ret. Sam Chapman Jr. beloved husband and loving father died on Sunday, May 23, 2021, at Prisma Health Richland in Columbia, South Carolina at age 80. He was the oldest of five boys born on February 1, 1941, in Greensboro, North Carolina to the late Thelma Butler and Sam Chapman, Sr. Growing up in Greensboro, NC, Sam graduated from James B Dudley High School in 1959 and was drafted into the army during the Vietnam War. While serving in the military, he attended Midlands Technical College. Sam served his country for 26 years. After retiring, Sam settled in Columbia, SC where he met and married the love of his life, “Vera”. They enjoyed 33 years of marital bliss. Sam was an avid sports fan, he played golf every chance he got. He was well liked by everyone he met. He never met a “stranger”. Sam loved his family, church, friends, and community. In addition to his parents, Sam was preceded in death by his three brothers: Kenneth Chapman, Vernon Couser, and Tyrone Couser. He leaves to cherish his precious memories his wife, Vera B. Chapman of the home; three daughters: Sakeena Conners of New York City, New York, Khadija Conners, and Medina Conners both of Columbia, SC; seven grandchildren: Shyheim Conners, Zoie Conners, Rajon Nesmith, Rihanna Nesmith all of Columbia, Daquan Mobley, Jalil Mobley, and Cataleya Kinsey of New York City; one great granddaughter: Harmoney Mobley of New York City; one brother: Terry Couser of Rutherfordton, NC; one niece: Lydia Couser of Rutherfordton; two nephews: Carlos Butler of Berlin, Germany and Chris Butler of Los Angeles, California; a special cousin, Larry Butler of Winston-Salem, NC; and a host of cousins and other family members who loved him and will miss him dearly.

The family of SFC, Ret. Sam Chapman Jr. created this Life Tributes page to make it easy to share your memories.

Send flowers to the Chapman family.