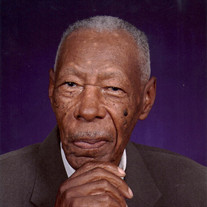 “A Man of the Soil, a Man of Strength” “And God said, Behold, I have given you every herb bearing seed, which is upon the face of all the earth, and every tree, in the which is the fruit of a tree yielding seed; to you it shall be for meat.” Genesis 1:29 KJV Mr. Sam Lewis, Jr., born February 25, 1926, transitioned peacefully from this earth to his eternal rest on Monday evening, February 1, 2016. He was a son of the Late Sam Lewis, Sr., and Rosa Pringle Lewis. Mr. Lewis spent his entire life serving the Sumter Community in multiple ways but especially through his agricultural work; a passion of which he pursued and mastered. He will be missed and remembered by many whose lives he was privileged to touch. Early in life, Mr. Lewis attended St. Luke AME Church, but after marriage in 1944, he became a member of Beulah AME church where he served faithfully for the remainder of his life. At Beulah he served in numerous roles and because his life was a living illustration of how a true man of God serves others, the title of Holy Steward was bestowed upon him. The title was earned and the role was filled as he diligently ensured the communion elements were in place and all in need were served in the church, hospitals, nursing homes and beyond. Mr. Lewis was preceded in death by: his beloved wife ; parents; two Sons-In-Law, Vernell Britton and Aignathser Simon; three brothers, Andrew, John and Charles Lewis; three sisters, Katie Stuckey, Helen Lewis, and Blanche Burgess; three Brothers-In-Law, Joseph Stuckey, Clarence Wilson, and Wilfred Burgess; two Sisters-In-Law, Margaret Lewis and Anne Lewis. Sam Lewis, Jr. was a family man and would often comment that he was blessed by his family. He married the late Alice China and to this union eight children were born. Two children, Vermelle Elizabeth Lewis Britton and Sammy Lee Lewis, preceded him in death. Left to mourn his death and rejoice in his life are his surviving children; two sons, John P. (Mary) Lewis of Sumter and Alonza C. (Dorothy) Lewis of Columbia; four daughters, Amelia D. Simon and Mary L. (Johnny) Cooke both of Sumter; Lois L. (Norman) Jenkins and Jean L. (Kenneth) Tisdale, both of Columbia, SC; two adopted daughters, Patricia M. (Tommy) Tate of Mascoutah, IL, and Bettie L. Samuel of Alexandria, Virginia; two brothers, James Lewis of Sumter and Woodrow T. (Effie) Lewis of Spartanburg, SC; two sisters Marie Wilson of Sumter and Rosa L. (George) Manigo of Bamberg, SC; three Sisters-In-Law, Eunice Lewis of Garner, NC; Loretta Lewis and Margaret Wright of Sumter; 21 grandchildren; 24 great-grandchildren; numerous nephews, nieces, cousins, and a host of friends.

&#8220;A Man of the Soil, a Man of Strength&#8221; &#8220;And God said, Behold, I have given you every herb bearing seed, which is upon the face of all the earth, and every tree, in the which is the fruit of a tree yielding seed; to you it... View Obituary & Service Information

The family of Sam Lewis Jr. created this Life Tributes page to make it easy to share your memories.