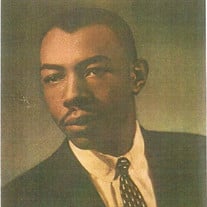 Samuel James Pringle was born in Sumter County, South Carolina on May 12, 1939, the second of five children born to the late Wilson Rivers Pringle, Sr. and Selena Louise Gadsden Pringle, both of whom were staunch Christians and Professional Educators. having been named for his maternal Grandfather, Rev. Samuel James Gadsden, he became known to his family and friends "SJ" or just "Jay Pringle". He accepted Christ as his personal Savior at the early age of twelve and SJ thus became a lifelong member of St. Luke African Methodist Episcopal Church, Sumter, South Carolina. Samuel James transitioned from labor to reward at 10:30 PM on November 24, 2017 at the McElveen Manor, Assisted Living Facility, Sumter, S. C. "SJ's" early childhood education was started at Winn Elementary School where he completed 1st thru 6th grades. After Commencement, he proceeded to Lincoln High School in Sumter, S.C., where he completed secondary education, graduating with the Class of 1957. Upon completion of high school SJ enrolled in Voorhees Junior College, Denmark, S. C., but upon completion of on one semester he decided to leave school to explore other vocational interests. After a few years of various types of work , he landed a position with the United Parcel Service (UPS) in Brooklyn, New York, where he remained until retirement. Along the way, "SJ" was united in Matrimony with Willene Isaac, formerly of Lee County, South Carolina. After more than twenty (20) years of marriage, their union unfortunately ended in divorced. God did not issue any children to this union; however "SJ" gained two step-sons, one of which preceded him in death. The surviving step-son is Mr. Luther "Mickey" Isaac of Brooklyn, New York. Also during this period Samuel James was drafted into the US Army, where he served honorably for a period of two years. Upon being discharged he returned to Brooklyn New York, where he resumed his career with UPS and made his home there for a period of more than In lieu of flowers contributions may be made to: The Lincoln H. S. Preservation, Alumni Association 22 Council Street Sumter, SC 29150 or to St. Luke A.M. E. Church, 2355 N. St. Pauls Church Rd, Sumter, S. C. Condolences may be made on his tribute page: wwwPalmerMemorialChapel.com Professional services rendered by Palmer Memorial Chapel, Inc.

Samuel James Pringle was born in Sumter County, South Carolina on May 12, 1939, the second of five children born to the late Wilson Rivers Pringle, Sr. and Selena Louise Gadsden Pringle, both of whom were staunch Christians and Professional... View Obituary & Service Information

The family of Samuel J. Pringle created this Life Tributes page to make it easy to share your memories.

Send flowers to the Pringle family.