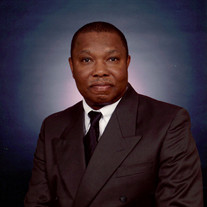 Samuel Witherspoon was born May 24, 1949 in Sumter County. He was the son of the late Isell Weldon Witherspoon and Mamie Davis Witherspoon. He died at his home on the afternoon of December 11, 2017. He received his early education at Dwyer Tindal School in Sumter and Manchester High School in Pinewood, South Carolina where he was a top linebacker for the football team and awarded a full scholarship to Bowling Green State University. He chose to honor his country by serving in the United States Marines and the Army National Guard, where he served as a Military Police officer prior to being honorably discharged. He was the lead commander’s official driver. His mom related to this by always saying, “If you want a chauffeur’s ride and feel just like a captain call Sammie.” He lived in Warren, Ohio for over 30 years and worked for General Electric (GE) as a Machinist Technician. He was an avid golfer, and a temporary entrepreneur, running his own shoe shine stand. He joined Enon Baptist Church at an early age where he served faithfully as a choir member and usher. While living in Ohio he was an active member of Second Baptist Church. In 2003 he was added to the Kingsbury Road Church of Christ where he participated in church scriptural activities. He had a fun-loving spirit, cared about others, and never met a stranger. He was married and to this union two sons were born, Jason and Christopher. Both blessed with love and successful careers. He leaves to mourn a devoted family, two sons and one grandson, Jason Witherspoon of Warren, OH, Christopher Witherspoon and 6-year old grandson, Andrès Witherspoon of New York, NY; one brother, Isell “Bubba” (Freda) Witherspoon, Jr., Warren, OH, six sisters, Ola M.(London) Budden, Jr. and Lucille Cummings all of Sumter; Ida E. (Thomas) Felder, Pinewood, SC, Bernice Townsell, Albany, GA, Connie (Gregory) Daniels, Murfreesboro, TN, and Patricia A. (Rodney) Dunham, Garner, NC; one god- brother, Rev. Sammie L. (Tonya) Drayton, Sr., Weston, NY; three uncles, a host of nieces, nephews, other relatives and friends.

Samuel Witherspoon was born May 24, 1949 in Sumter County. He was the son of the late Isell Weldon Witherspoon and Mamie Davis Witherspoon. He died at his home on the afternoon of December 11, 2017. He received his early education at Dwyer... View Obituary & Service Information

The family of Samuel Witherspoon created this Life Tributes page to make it easy to share your memories.