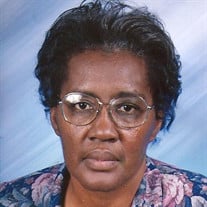 Sarah Emma Wilson Butler, 78, beloved wife of the late Eddie Lee Butler, Sr., died on Wednesday, December 11, 2019 at Encompass Rehabilitation Hospital in Columbia, SC. Born in the St. Charles Community of Mayesville, she was the daughter of the late John Spann and Minnie Lee Wilson. She was educated in the public schools of Lee County. She was a 1958 graduate of Mount Pleasant High School and a graduate of Allen University. She was a devoted educator who retired from the Lee County Public School System after teaching for over 30 years. As a child and young adult she was a member of Mt. Moriah UMC in Mayesville and after marriage she became a devoted member of St. James UMC in Sumter. She faithfully served as a member of the United Methodist Women, as a church Greeter, assisted with Vacation Bible School, and was a studious participant in the weekly bible study class and Women’s Sunday School Class. She leaves to cherish precious memories two children, Jacqueline T. Butler and Reginald M. Butler both of Sumter; one uncle Mr. Robert “Bobby” Wilson of Fayetteville, NC; two sisters-in law, Mrs. Elizabeth G. Butler and Mrs. Geraldine W. Butler both of Sumter, SC; and three grandchildren, Christopher, Caitlyn, and Camille of Simpsonville; and a host of nieces, nephews, cousins, other relatives and friends. In addition to her parents, she was preceded in death by her husband, Mr. Eddie Lee Butler, Sr.; a brother, Mr. David Wilson; two brothers-in-law, Mr. Allen Butler, Sr. and Mr. Leland A. Butler, Jr.; one nephew, Mr. Allen Butler, Jr.; a step-son Mr. Eddie Lee Butler, Jr., and a step-daughter Ms. Cathy Butler. The family will receive visitors at the home, 144 N. Milton Rd, between the hours of 3:00 pm – 7:00 pm up until the day of the funeral.

The family of Sarah Wilson Butler created this Life Tributes page to make it easy to share your memories.

Send flowers to the Butler family.