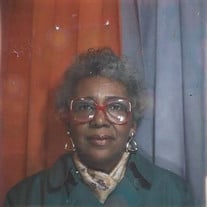 Sarah Miley Jenkins was called from labor to reward, Tuesday, September 12, 2017, at Lexington Medical Center Extended Care. Born July 10, 1927, in Estill, South Carolina, she was one of 9 children born to the union of Bertha Robeson and Alex Duncan. Married in her early twenties to John Henry Taylor, Sarah was blessed with three children: Linda, George, and John Taylor. Early in their marriage, Sarah and John Henry separated leaving Sarah with the task of raising their young children. She relocated to New York in the early 1950s and began work in the factories as well as healthcare jobs with the city in order to care for her children, mother, and several siblings still at home. in fact, she built a house in Estill for her children and her mother. Through it all, Sarah was ambitious, studying to become a nurse and receiving licensure for the same, During this time, she met her second husband Arthur Jerry Jenkins, to whom she remained married for 31 years until his death in 1993. Sarah returned to college and became a New York City social worker. She loved her church, Community Church of Morrisania, in the Bronx, New York. She was active in her circle, the Mary McLeod Bethune Circle, and later became the church social worker thus being titled "Minister of Human Concerns." She was an active deacon and even, at one time, served on the choir. Sarah was a rock to her family, who lovingly called her "Sister;" she took care of everyone, gave advice and was well respected within her family and the community. In addition to her parents, several siblings, and husband Arthur, Sarah was preceded in death by her children Linda and George. Left to cherish precious memories are her son John Lynwood (Janice) Taylor; 8 granddaughters; 2 grandsons; 4 great-granddaughters; 2 great-grandsons; 3 siblings: Lessie (Willie C.) Pollins, Cornelia Villard, and Frances George; as well as a host of nieces, nephews, other relatives and friends who will sorely miss this wonderful woman who allowed the life she lived to speak for her.

Sarah Miley Jenkins was called from labor to reward, Tuesday, September 12, 2017, at Lexington Medical Center Extended Care. Born July 10, 1927, in Estill, South Carolina, she was one of 9 children born to the union of Bertha Robeson and Alex... View Obituary & Service Information

The family of Sarah Miley Jenkins created this Life Tributes page to make it easy to share your memories.

Sarah Miley Jenkins was called from labor to reward, Tuesday,...

Send flowers to the Jenkins family.