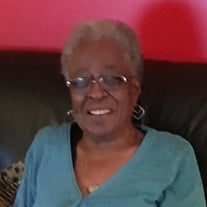 Sarah Ellen Williams was the second of four children born to the late Hazel Romeo Ragin and Zelia Lula Jones Ragin on July 5, 1934, in Summerton, South Carolina. She graduated from Manning Training School in the Class of 1951 at the age of 16, and later attended South Carolina State College and before migrating to Detroit, Michigan, Washington, DC, and Philadelphia, Pennsylvania. She was the first African-American telephone operator for Bell Telephone Company before relocating to New York where she was a buyer for Blumstein's Department Store before going to work for the New York Transit Authority where she retired as a supervisor in 1994. After retirement, she returned to South Carolina and resided in Lexington until she made her transition. Sarah wanted to start a new life, own her own home, leave the hustle and bustle of the big city so that she could garden, cook, play cards, sew, do light bookkeeping, enjoy crossword puzzles and word games, and travel (even to China). Sarah, along with her parents Hazel and Zelia, was one of the original signers of the Briggs v Elliott petition, which led to the Briggs v Elliott lawsuit that became one of the four cases in the 1954 Brown v Board of Education decision. She also participated in the 2004 50th Anniversary Celebration of the landmark decision. As a result of her challenges, Sarah channeled her activism into support of the best possible education for her children. As a single parent, she helped her four daughters attend private boarding schools and college. As a young girl, she was raised in Historic Liberty Hill AME Church; she later joined Jones AME Church in Lexington, where she served as Church Treasurer. In addition to her parents, Sarah was preceded in death by her daughter, Tanya Williams.; two brothers: Charles Ragin and Romeo Ragin; and two sisters: Roberta Dingle and Cynthia Gilyard. She leaves to cherish precious memories three daughters: Andrietta Ragin Sims of New York, Diane Ellen Williams of South Carolina, and Darlene Xina (Tim) Goering of New Mexico; three grandchildren: Kendall Tyler Calyen, Kendra Zelia Sims, and Tyler Zachary Goering; a sister Leversa Johnson of South Carolina; a brother Andrew Lee (Khalilah) Ragin of Virginia; nieces, nephews, and other relatives and friends.

Sarah Ellen Williams was the second of four children born to the late Hazel Romeo Ragin and Zelia Lula Jones Ragin on July 5, 1934, in Summerton, South Carolina. She graduated from Manning Training School in the Class of 1951 at the age of... View Obituary & Service Information

The family of Sarah Ellen Williams created this Life Tributes page to make it easy to share your memories.

Sarah Ellen Williams was the second of four children born to...