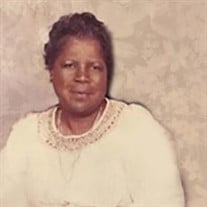 Mrs. Reeves was born in Columbia, South Carolina on April 5, 1929 to the late Mr. Herbert and Mrs. Alberta Broome Bookert. She was the fifth of eight children. She departed this life on Friday, September 24, 2021 at the Prisma Health Baptist Parkridge Hospital in Columbia, South Carolina. She attended the public schools of Richland County and retired, from the food services department at Lexington/Richland School District Five. At an early age, she accepted the Lord Jesus Christ as her Savior and was a lifelong member of the AME Church. She joined St. Paul AME Church seventy years ago and served with honor and distinction as a member of the Jubilee Choir, President of the Missionary Society, President of the Pastor’s Aid Society, Church School teacher, and member of the Stewardess Board. She was also the Mother of St. Paul AME Church. Mother Reeves loved the Lord and was not only mother to her natural children but was honored as “mother” by many of her nieces, nephews, and others in the community. Her kind, caring, loving, and God-fearing spirit was infectious and respected and revered by many. The following note to the family from her nephew, the Reverend Dr. Percival Reeves, pastor of Sanctuary United Methodist Church, Charlotte, NC, summarizes the essence of Mother Reeves, “I never met a more consistently sweeter and humble servant in all my life. Her laugh, humility, love of God and sense of humor were one of a kind and will be eternally missed.” Mother Reeves was married to her devoted husband, the late Rev. Matthew J. Reeves for seventy years and their union was blessed with seven children. She was preceded in death by her parents, Herbert and Alberta Bookert; husband, Rev. Matthew J. Reeves; son, Donald Lewis Reeves; five brothers, Daniel Bookert, Fred Bookert, Edward Bookert, Curtis Bookert, and Carey Bookert; and sister, Ethel Bookert. She leaves to cherish her memory, two daughters, Rev. Dr. Maxine Reeves Sumpter and Rev. Rhudene Reeves (Carl) Toomer, M. Div., both of Irmo, SC; four sons, Ronnie (Veronica) Reeves of Irmo, SC, Harold J. (Teresa) Reeves of Columbia, SC, Rev. Dr. Morgan Bruce Reeves of Winnsboro, SC and Tony (Dr. Geri) Reeves of Hendersonville, TN; daughter-in-law, Dovey Reeves of Charlotte, NC; sister, Diana Bookert of Columbia, SC; step sisters, Ruth Exum of Columbia, SC and Thedrick Calhoun of WV; one sister-in-law, Hortense Whetstone of Columbia, SC; seventeen grandchildren; nineteen great-grandchildren; and a host of nieces, nephews, relatives and friends. Please go to www.stpaulameirmo.com to view live stream of services at 11:00 AM

Mrs. Reeves was born in Columbia, South Carolina on April 5, 1929 to the late Mr. Herbert and Mrs. Alberta Broome Bookert. She was the fifth of eight children. She departed this life on Friday, September 24, 2021 at the Prisma Health Baptist... View Obituary & Service Information

The family of Mrs. Seretha B Reeves created this Life Tributes page to make it easy to share your memories.

Mrs. Reeves was born in Columbia, South Carolina on April 5,...

Send flowers to the Reeves family.