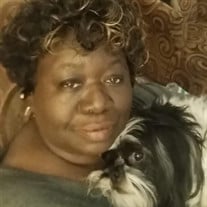 On Thursday, February 7, 2019, Sheila Ann James entered into her eternal rest at Doctor’s Hospital in Augusta, Georgia. Born in Sumter County on January 3, 1960, she was the One and Only daughter of Emily Dixon James and the late Carl James, Sr. Sheila was a proud member of the Sumter High School Class of 1978. Upon graduation, Sheila enrolled at Winthrop College, now Winthrop University. She received her Bachelor of Arts in Sociology in May 1982. Sheila started her career in the Federal Government as a Clerk Typist with the Farmers Home Administration in Columbia, South Carolina. She held various positions in the Department of Defense at Fort Jackson in Columbia, South Carolina before she found her passion. She loved engaging with clients, conducting assessments and developing interventions to assist in employee discrimination complaints. In an effort to further enhance her skills, she obtained a graduate degree in Conflict Resolution at Columbia College in Columbia, South Carolina. She matriculated in May of 2001. In August 2004, Sheila pursued her dream job as an Equal Employment Opportunity Specialist in the Nation’s Capital at the Department of the Army. In 2008, Sheila transferred to Augusta, Georgia. She continued as an Equal Employment Opportunity Specialist at Fort Gordon until her untimely passing. Sheila was passionate about being a role model for young girls. For much of her career, Sheila was a Big Sister for Big Brothers Big Sisters of Greater Columbia. Sheila was the ultimate Daddy’ Girl because he set the standard for how young ladies should be treated. She even got her love of football from her Dad. They were both life-long Dallas Cowboys fans. She was a dog lover and was the best parent to her Shih Tzu fur babies Dae and Bella whom she had separately for several years. Dae and Bella were the most pampered and loved dogs. Sheila lived her best life enjoying music concerts, attending professional football games and wine tastings. Sheila’s quick wit, strong will, bright smile and engaging personality will truly be missed by all who knew and loved her. She was preceded in death by her father, Carl James Sr., her brother, Carl James Jr. and two aunts, Lula B. Roberts and Mary A. James. Sheila leaves to cherish her memories, her loving mother, Emily Dixon James of Sumter, SC; her brother, Arnold (Aida)James of Frederick, MD; nieces, Ani Boghossian-James and Ave Boghossian-James of Frederick, MD; five aunts, Edith (Malachi) Wells of Waterford, CT; Shirley A. James of Sumter, SC; Ella “Tish” Wells of Rock Hill, SC; Sarah Chiles of Columbia, SC; and Ella (John) Gooden of Monks Corner, SC; one uncle, Charles James of East Orange, NJ; very special family members Keith and Tonya Ivey and their children; one goddaughter, Ashley Cherry

On Thursday, February 7, 2019, Sheila Ann James entered into her eternal rest at Doctor&#8217;s Hospital in Augusta, Georgia. Born in Sumter County on January 3, 1960, she was the One and Only daughter of Emily Dixon James and the late Carl... View Obituary & Service Information

The family of Sheila Ann James created this Life Tributes page to make it easy to share your memories.