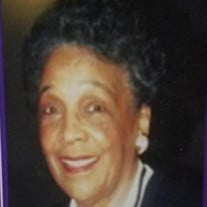 Shellie Rogers Kimpson transitioned peacefully on May 14, 2020, after an extended illness. Born and reared in Hickory Tavern in Laurens, SC, she was the eldest daughter of Shelly D. and Alberta Barksdale Garrett. A 1955 graduate of Benedict College, she received her Masters in Elementary Education from the University of South Carolina. Shellie Ruth, as she was fondly called by family and close friends, met and married her husband, Willie R. Rogers, while he was also a student at Benedict College. Their union was blessed with two children: a daughter, Abigail, and son, Wilfred. Following the death of her first husband, she then met and married another Benedict graduate, Joseph E. Kimpson. Shellie taught in the Columbia public school system for 30 years, retiring from Brennen Elementary when Willie, her husband of 33 years, became terminally ill. She then spent her time volunteering with the Richland County Guardian ad Litem Office. She was an active member of the Richland County Teachers' Association and the St. John Baptist and Second Calvary Baptist Church Missionary Ministries, usher boards and choirs. She tutored elementary students at Anna Boyd School and was a dedicated Silver Member of Alpha Kappa Alpha (AKA) Sorority, Gamma Nu Omega Chapter, serving faithfully for over 40 years, until her health declined. Active in the Benedict College Alumni Association, she was a generous donor and former Alumni President, who vigorously recruited other members and urged their support of the BC Cause. She is known for personally assisting Benedict students, by purchasing books and the appropriate clothing for job interviews. She loved her school and believed in giving back. Working with district employees, Shellie was instrumental in establishing the Willie R. Rogers Adult Education School, located in Richland School District Two. This school’s mission is to educate those without high school diplomas. Elegant and sophisticated on the one hand, she remained a country girl at heart! She famously enjoyed fishing, gardening and pick up trucks! An independent spirit, she loved to travel and would set off on an adventure at the drop of a hat. Shellie enjoyed playing the piano and listening to good instrumental music of almost every genre. She loved to laugh and found pleasure in the simple things in life. She was devoted to her church and her family. Shellie was predeceased by her parents, her first husband, Willie R. Rogers, and a sister, Lillian Garrett (who died in infancy). Those left to cherish her memory include: her loving husband, Joseph E. Kimpson; her beloved daughter, Abigail R. Rogers; her devoted son, Wilfred (Pam) Rogers; adopted son, David Rogers; twin joys, her grandsons: Winston and Stanton Rogers; granddaughter and best friend, Garrett Ella Harris; one sister, Lila G. Lloyd; former son-in-law, friend and laughing buddy, Fred Harris; her stepchildren: Crystal Kimpson Roberts, Maxwell Joseph (Letetia) Kimpson, and Pamela Kimpson (Milton) Mack; cherished step-grandchildren: Matthew Charity, Adam Charity, Malachi Roberts, Carmen J. Kimpson, Maxwell Whittington Kimpson and Maya Mack; a large extended family and many friends who will greatly miss the twinkle in her eye, her ready smile and her loving presence. In lieu of flowers, please make memorial donations to: Gamma Nu Omega Chapter Alpha Kappa Alpha Sorority, Incorporated 1203 Ashley Street Columbia, South Carolina 29203 or to the charity of your choice.

Shellie Rogers Kimpson transitioned peacefully on May 14, 2020, after an extended illness. Born and reared in Hickory Tavern in Laurens, SC, she was the eldest daughter of Shelly D. and Alberta Barksdale Garrett. A 1955 graduate of Benedict... View Obituary & Service Information

The family of Shellie G Rogers Kimpson created this Life Tributes page to make it easy to share your memories.