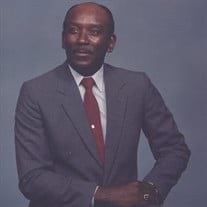 The life of Sidney Bates, Jr. began on May 23, 1932, in Prosperity, SC. The youngest of four children born to the late Granville Bates and Bessie Mae Gallman Bates, he departed this earthly life for his heavenly home on Sunday, October 29, 2017, at his residence. Sidney, affectionately known as "Shug," attended the public schools of Newberry County and enlisted in the United States Army, serving as a Staff Sergeant before his retirement. He served two tours of duty in Vietnam where he earned the Bronze Star Medal for his leadership and accomplishments. He served in Korea as well. After completing his military duty, Shug attended college. He was later employed by Nabisco, where he retired after twenty-five years of committed service to focus on his family, especially his girls. Being the father of all girls, Sidney's deep love for his family showed in his being a true provider and strong father. Prior to losing his sight, he loved attending church, working out, doing yard work and watching baseball, especially the Atlanta Braves. Shug also loved Cadillacs owning several through his lifetime. Even after the loss of his sight, he was still independent, self-sufficient and enjoyed his life. In addition to his parents, Sidney was preceded in death by his siblings: Willie Ray Bates, Naomi Jackson, and Bennie Bates. He leaves to cherish precious memories six daughters: Kecia Bates, Sydney Bates, Sidney Bates, Beverly Moyd, Teresa (Bernard) Faust, all of Columbia, and Petra Lubowitski of Germany; two stepdaughters: Clarissa Fitzpatrick and Barbara Smith; nineteen grandchildren; thirteen great-grandchildren; one brother Steven (Joyce) Bates of Newberry; his buddy and beloved granddaughter Victoria Chandler; his grandson Trevon Drayton Bates; his adopted son-in-law Gary Mitchell; and a host of nieces, nephews, and other relatives and friends.

The life of Sidney Bates, Jr. began on May 23, 1932, in Prosperity, SC. The youngest of four children born to the late Granville Bates and Bessie Mae Gallman Bates, he departed this earthly life for his heavenly home on Sunday, October 29,... View Obituary & Service Information

The family of Sidney Bates Jr. created this Life Tributes page to make it easy to share your memories.

Send flowers to the Bates family.