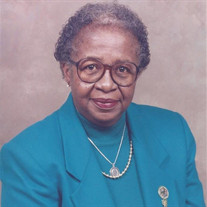 Sophia Elizabeth DuBose Babridge, 88, wife of Leon Babridge departed this earthly life on Monday, January 8, 2018, at Palmetto Health Richland in Columbia, South Carolina. Born in Hartsville, South Carolina on June 22, 1929, she was the only child of the late Preston and Emma Williams DuBose. Educated in Hartsville, she was a graduate of Butler High School in the Class of 1946. She earned a Bachelor of Science Degree in Home Economics in 1950 from South Carolina State College, and a Master's Degree in Home Economics from Winthrop University. She was an educator who taught at Macedonia High School in Blackville, South Carolina, and Lancaster Training School (later known as Barr Street High School). Her final teaching assignments were at Fairwold Junior High School and Sanders Middle School in Columbia, where she retired in 1997, after over 40 years in the field of education. In 1948, she joined Beta Sigma Chapter of Alpha Kappa Alpha Sorority, Inc., and served as Basileus of Gamma Nu Omega Chapter. She chaired the Housing Committee and was instrumental in the establishment of the AKA House on the corner of Ashley and North Main Streets in Columbia. She served as Philacter on both regional and national levels for numerous years. She chartered the Rock Hill Eta Alpha Omega Chapter of AKA. Other community involvements included: serving as President of the South Carolina Home Economics Association; and active participation in the auxiliaries of Omega Psi Phi Fraternity, Inc. After her marriage to Leon Babridge, she joined her husband in the Presbyterian church and first attended Pleasant Ridge Presbyterian Church, Lancaster. In 1960, they moved to the Columbia community, built their home in Blythewood, first attended Ladson Presbyterian Church and then became an organizing, charter member of Northminster Presbyterian Church. She faithfully served Northminster in the following capacities: Presbyterian Women; Clerk of Session; Committees of the Senate and Presbytery; delegate to National Assemblies on three occasions; General Presbyter Search Committee; and moderator of the Trinity Presbyterian Assembly. While at Lancaster Training School, she met the love of her life, Leon Babridge, and three years later on December 20, 1956, they were married. In 1960, to this loving union, their only son Kevin Leonard'o Babridge, Sr., was born. In addition to being a loving wife and mother, Sophia also cared for her mother in the family home for over 20 years. She was quiet but firm in her demeanor, very well-respected, and was a constant companion to her husband as they traveled to sorority and fraternity events around the country. When you saw one, you saw the other. She leaves to cherish precious memories her husband of 61 years, Leon B. Babridge of the home; her son, Kevin L. (Tracy Ann) Babridge, Sr.; two grandchildren: Kevin L. Babridge, Jr., and Karl Christopher Babridge; and a host of other relatives and friends.

The family of Sophia Elizabeth DuBose Babridge created this Life Tributes page to make it easy to share your memories.

Send flowers to the Babridge family.