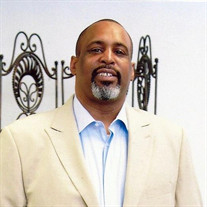 Stacey Javon Gadsden departed this earthly life on January 11, 2017 at his residence in Stockbridge Georgia. Born in Sumter County on June 2, 1968, he was the eldest of two children born to the late Annie B. Gadsden Chaney. Educated in the Sumter public school System, he was a graduate of Sumter High School, Class of 1986. He enlisted in the US Army and was stationed at Fort Gordon, Georgia and Scofield Barracks in Hawaii. While residing in Sumter, he was previously employed by the People Gas, Westinghouse, and Jones Chevrolet. After moving to Atlanta, Georgia, he earned an associate’s degree from Devry University in Computer Electronics. Stacey was employed as a field service technician with Bombardie Inc. for over 21 years. His employment allowed him the opportunity to work all over the country and the world installing transportation systems. He enjoyed his international travels especially to Dubai, United Arab Emirates. In his spare time, he enjoyed all sports especially, basketball, R& B and gospel music, (his favorite was Kirk Franklin), watching movies and the television series” The Wire.” Stacey was a very caring and sensitive man; he knew and anticipated a need before it was spoken. This quality allowed him to have a special rapport with children and senior citizens. He had a special relationship and was a father figure to his nephew K. J., who he took the time to instill the importance of education, emphasizing the important of books and the learning process. They also spent fun time, go-cart driving, arcade, where he used every opportunity to teach life lessons from how to tip fixing things and the importance of being a giver, a doer, and an encourager. His sayings and quotes will be eternally branded; “Don’t be selfish”, “never go to a house empty handed”,”be grateful for what you get”, “don’t be a follower, be a leader” and “be original.” He was very punctual and had an excellent work ethic. Stacey was a mystery. He spoke only when necessary, his actions spoke louder than his words. The scope of his caring extended beyond his family and allowed his attributes to be experienced by a special daughter, Kennedy Edwards and “niece, Mel ‘Arnesia A. Isaac.” In addition to his mother, and grandmother, Rosa Horton Williams, he was preceded in death by a uncle Jimmy Lee Gadsden and an aunt, Annie Mae Benjamin. He leaves to cherish precious memories, his sister Natasha Chaney of Sumter, his nephew, Kevin” K. J.” Taffe; his uncle, Raymond Mitchell, of Elloree, South Carolina; aunt Mary Gadsden, Ravenel, South Carolina ; a granduncle, Manuel Benjamin, of Sumter; a special Godmother, Leola Sessions; “a special daughter, Kennedy Edwards” of Marrow, Georgia, and adopted niece, Mel’ Arnnesia A. Issac and a host of other relatives and friends.

Stacey Javon Gadsden departed this earthly life on January 11, 2017 at his residence in Stockbridge Georgia. Born in Sumter County on June 2, 1968, he was the eldest of two children born to the late Annie B. Gadsden Chaney. Educated in the... View Obituary & Service Information

The family of Stacey Javon Gadsden created this Life Tributes page to make it easy to share your memories.

Send flowers to the Gadsden family.